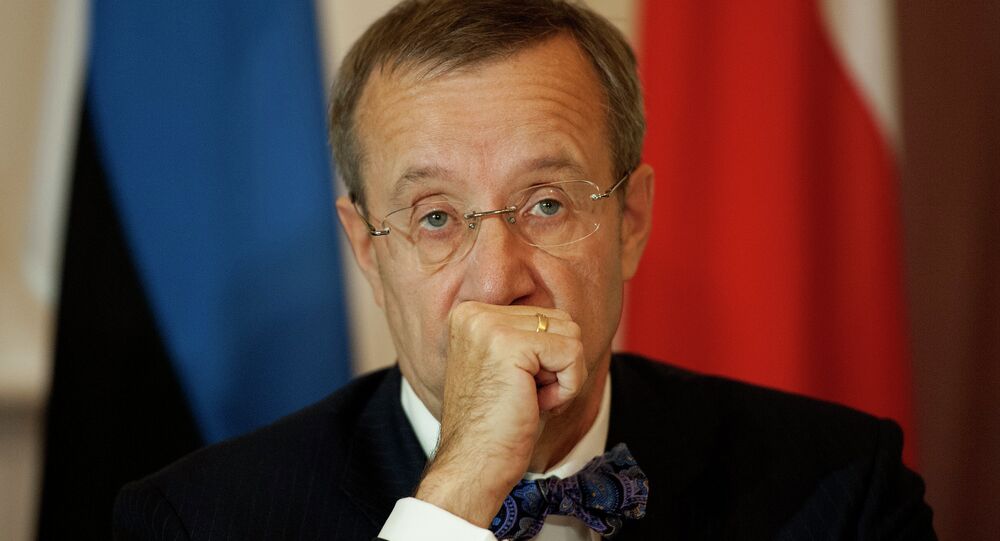 Estonian President Toomas Hendrik Ilves said that further stationing of NATO troops at a higher number is reasonable in Estonia.

At the moment, the only NATO contingent in the country is one company of US infantry comprising 150 servicemen.

"One hundred and fifty soldiers is not a lot, so we do think that further stationing of troops at a higher number is only reasonable," Ilves was quoted as saying by the newspaper on Saturday.

At the 2014 NATO summit in Wales, the alliance revealed plans to deploy a high readiness task force in the Baltic states, consisting of 5,000 troops. But Ilves said that the five-day period that it would take for the task force to be deployed was too long in case of an emergency.

© REUTERS / Ints Kalnins
US Tanks, Troops Arrive in Estonia for Joint Military Drills - Estonian Mission to NATO
"But if you look at the exercises that are done by our neighbor, they're basically instantaneous. They're here and it's over in four hours," the Estonian president said commenting at Russian snap drills.

In March, Estonia hosted US tanks and military equipment that had arrived for international drills.

In February, NATO members' defense ministers decided to establish six command and control units in Estonia, Bulgaria, Latvia, Lithuania, Poland and Romania to ensure that national and NATO forces were able "to act as one from the start" if a crisis arises.

Russia has repeatedly expressed its concerns over the buildup of NATO military presence close to its western borders. The bloc, in turn, accuses Moscow of providing military support to independence fighters in eastern Ukraine.

US Paratroopers Carry Out First Skydiving Exercises in Estonia - Army

US, Estonian Inspectors to Conduct Observation Flight Over Russia