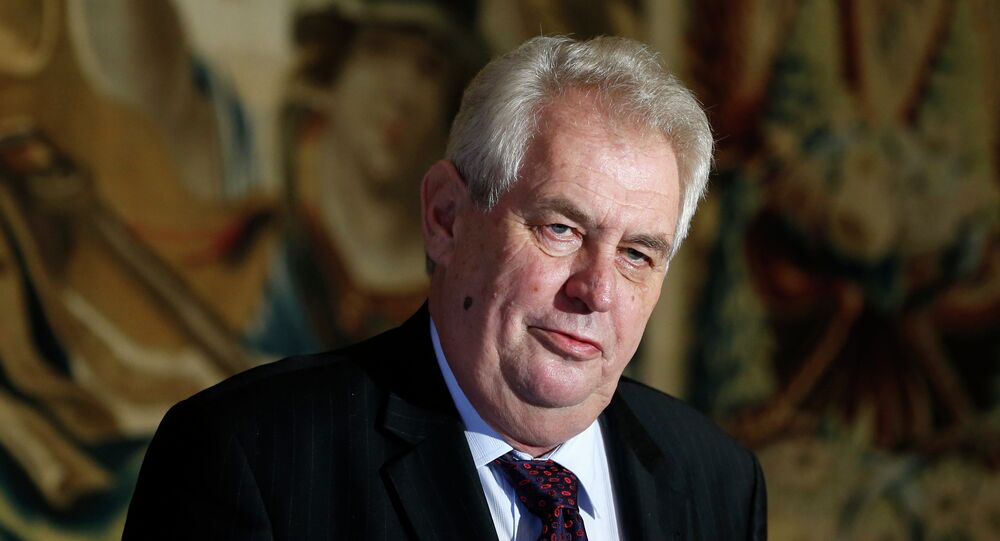 After a heated debate on Wednesday the Czech government postponed until next meeting decision on President Milos Zeman's May 9 trip to Moscow to attend Victory Day celebrations, Prime Minister Bohuslav Sobotka told reporters.

© AP Photo / Petr David Josek
Czech President Freezes Out US Ambassador for Undiplomatic Advice
Ahead of Wednesday’s Cabinet meeting Bohuslav  Sobotka said his Social Democratic party would not block President Zeman's trip to Moscow in a sign of gratitude to the memory of the Soviet soldiers who died liberating Czechoslovakia from Nazi occupation  during WW2, Czech media reported.

The junior ruling Christian Democrats (KDU-CSL) warned  beforehand that they would not support it if Zeman were to attend a military parade on Red Square.

"I have nothing against paying homage to those who sacrificed their lives during the war, but under the present circumstances I think it would be inappropriate for our president to attend a military parade in Moscow,” Deputy PM and KDU-CSL chairman Pavel Belobradek said.

Deputy PM and Finance Minister Andrej Babis, leader of the centrist ANO party, said Zeman would be right if he reconsidered his decision to go to Moscow on May 9.

However, Milos Zeman insists on it saying if he did not attend the celebrations, he would offend the 150,000 Soviet soldiers who died during the liberation of Czechoslovakia.

If the cabinet did not approve it, Zeman would have to pay from his own pocket. The costs are put at 600,000 crowns, but excluding the military special plane.