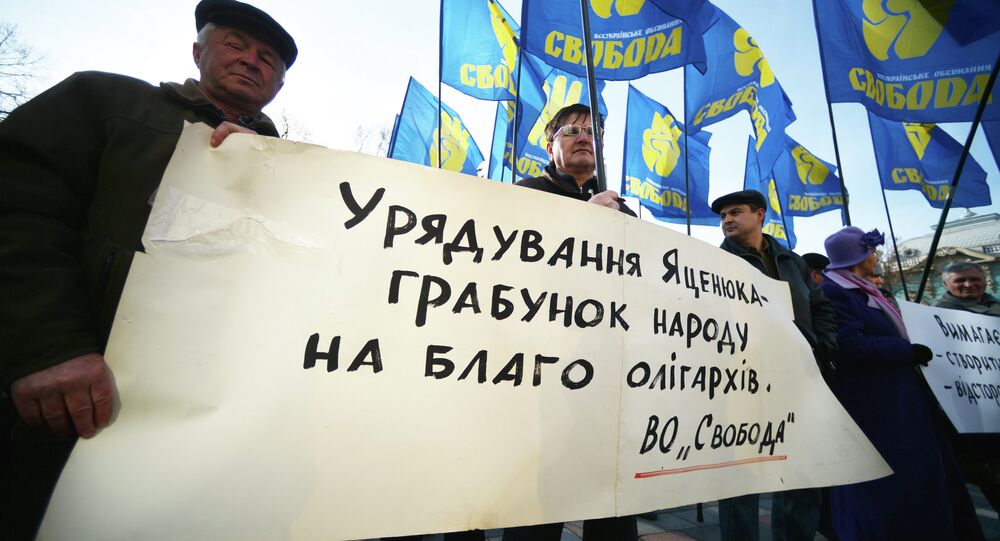 Hundreds of people, mostly from the Ukrainian Nationalist “Svoboda” party, have taken to the country’s parliament on Tuesday to rally against corruption, demanding the set-up of a temporary parliamentarian investigative commission to investigate corruption in parliament and the temporary resignation of the Prime Minister for the period of inquiry.

Several hundred activists from the Ukrainian nationalist “Svoboda” party and some youth political movements took to the country’s parliament, the Verkhovnaya Rada, on Tuesday morning.

They are rallying against wide-spread corruption in the country, demanding the set-up of a temporary parliamentary commission to investigate possible cases of corruption within the parliament. They also call for the temporary resignation of Prime Minister Yatsenyuk, at least for the period of the parliamentary inquiry, as they are convinced he will do his best to influence on the investigation.

Voices are being heard within the parliament of the prime minister removal.

BREAKING: #Ukraine: 20 MPs are blocking the podium inside the #Rada and demanding #Yatsenyuk's removal

The demonstrators outside the parliament are holding banners saying that Yatsenyuk “deliberately increases fares [for housing and utilities] to get the money to steal from” and that “Yatsenyuk’s government [means] the robbery of people for the benefit of oligarchs.”

Though the meeting was quite calm, the security measures around the parliament have been stepped up due to the start of the regular parliamentary session.

A deputy to the Kiev Regional Council has posted pictures of new armored vehicles which have been brought to the eastern entrance to the parliament to prevent any possible clashes and other types of disorders.

Meanwhile, the people keep streaming in.

From April 1, housing and utilities fares for the residents of Ukraine will increase considerably, due to the conditions of the IMF for the provision of financial assistance to the country.