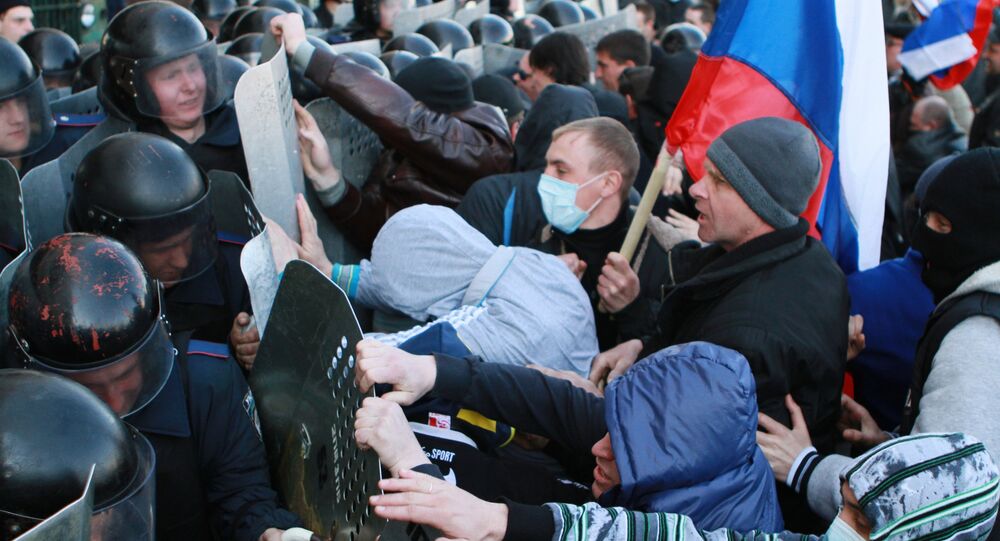 A year since the Donetsk regional administration building was seized by protestors, we look at how the event paralleled similar occupations in central and western Ukraine and how US officials responded to them.

Exactly one year ago, on April 6, 2014, Antimaidan protesters supporting federalization in Ukraine seized regional administration buildings in Donetsk and Lugansk.

The Antimaidan protests in southern and eastern Ukraine began in response to the February coup. They were initially citizen vigils aimed at preventing the destruction of Lenin statues by right-wing Euromaidan supporters.

The protests gained a political edge after the Ukrainian parliament voted to repeal a law that granted local languages including Russian a regional on the February 23. Protesters waved Russian flags to highlight their identity and rallied for referendums to determine their regions' legal status.

Similarly, administration building seizures in central and western Ukraine followed the passing of so-called "January 16 Laws." Those laws legally limited protest tactics used at the anti-government protests in Kiev and created legal punishments for extremism. The laws were repealed on January 28.

By April, as Ukraine's security service began arresting Antimaidan supporters, the protesters began seizing regional administration buildings. After the seizure of the Kharkov regional administration, Ukrainian Interior Minister Arsen Avakov announced the beginning of an "anti-terrorist operation." The unwillingness of the Ukrainian government to negotiate or conduct a referendum led many in the movement to demand independence over federalization.

US Ambassador in Ukraine Geoffrey Pyatt called the building seizures "terrorist actions." On January 10, 2013, during the Euromaidan protests in Kiev, Pyatt and Assistant Secretary of State Victoria Nuland visited government buildings seized by the protesters.

At the illegally seized trade union building in Kiev, Pyatt and Nuland conducted negotiations with future Ukrainian President Petro Poroshenko and future Prime Minister Arseniy Yatsenyuk. Petro Poroshenko, not very visible at the protests but playing an active role in their organization, is shown in a split-second frame at 0:15 in the above video:

YouTube
Poroshenko stands in the background of a meeting between US officials and Ukraine's opposition at the occupied Trade Union Building in Kiev on December 10, 2013.

Poroshenko, wearing a gray suit is third from the right, standing left of Arseniy Yatsenyuk and behind Oleh Tyahnibok, who is wearing a gray jacket. He is not featured in any published photos of the meeting.

Kiev Army Has Neither Skills Nor Capabilities to Regain Lost Territories