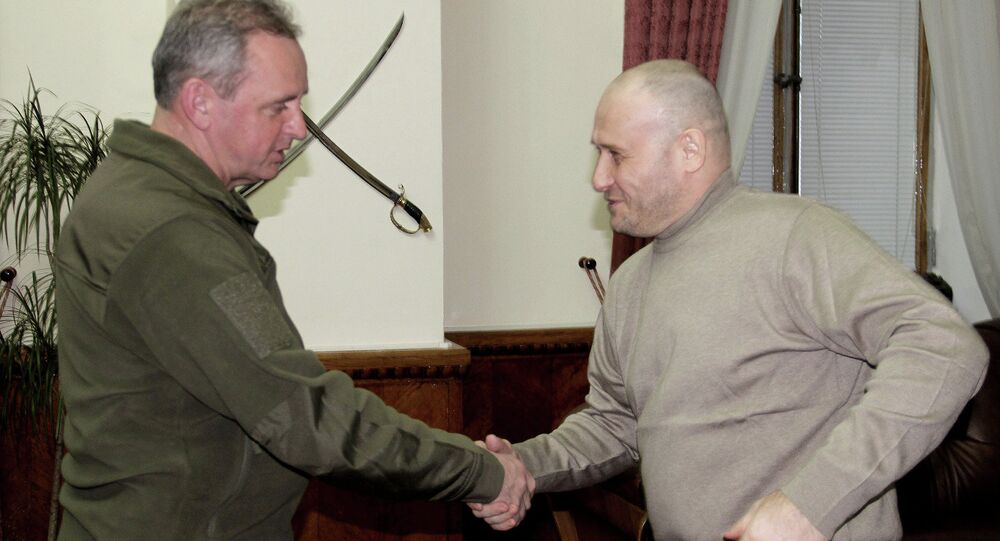 Dmytro Yarosh, leader of the Right Sector Party and militant group, has officially taken a position in Ukraine's Defense Ministry as an advisor to the Chief of General Staff, a press release from Ukraine's Ministry of Defense has confirmed.

The Ministry release pictured Yarosh meeting with Ukrainian Chief of General Staff and Commander-in-Chief of the Armed Forces Viktor Muzhenko over the weekend, noting that Muzhenko and Yarosh had "agreed the format of cooperation between 'Pravyi Sector' and the Ukrainian Armed Forces."

According to the release, Muzhenko is said to have "stressed [that] the Ukrainian army had become one of the strongest armies in Europe," its soldiers proving that "they knew how to fight and appreciate the contribution of volunteer battalions to the defense of Ukraine."

"We gathered all the patriots and defenders of Ukraine under [a] single leadership. The enemy understands our unity and that its attempts end in failure. We have one goal –a united Ukraine. The Army becomes stronger each week," Muzhenko noted. The leader added that the armed forces have been working to increase efficiency at all levels.

The release stated that for his part, Yarosh "underlined [that] unity was the key precondition for further successful fighting and demonstrated [a] readiness to establish cooperation and integration of volunteer battalions [into] the Ukrainian Armed Forces."

© AFP 2021 / SERGEI SUPINSKY
Ukraine's Right Sector Leader Wants Donbas Residents Deported
As for the Right Sector's so-called 'self-defense battalions', which include two battalions operating in eastern Ukraine as well as eight reserve battalions located throughout the rest of the country, they are set to be transformed into autonomous brigades of the Ukrainian Armed Forces, comprising both combat and reserve units.

Yarosh, the leader of the Right Sector, a coalition of ultranationalist, openly fascist and neo-Nazi organizations formed during the Euro-Maidan protests in Kiev last year, was placed on Interpol's wanted list last April, wanted for "public incitement of terrorist and extremist activities involving the use of mass media." In November 2014, the Russian Supreme Court declared Right Sector to be an extremist organization, and banned its activity on the territory of the Russian Federation.

Yarosh has been known for his constant stream of provocative statements, saying that the residents of Donbass should be deported, imprisoned and forcibly "deprived of civil rights" following the Ukrainian army's successful 'liberation' of territories presently under militia control. The leader also noted recently that Ukraine may be headed for a third Maidan, which would be much bloodier than before.

© Sputnik / Alexander Maximenko
Right Sector Leader Predicts New Maidan, Larger and Bloodier Than Before
The Right Sector is known for its key role in fighting with Ukrainian police in the streets of Kiev and in the capture of government buildings during the Euro-Maidan Revolution. Following the February Coup which overthrew the government of Viktor Yanukovych, the group's elements, organized into battalions, have played a key role in the crushing of protest movements in central and eastern Ukraine. Donbass residents have accused Right Sector battalions in eastern Ukraine of war crimes. Independent observers have also pointed to the group's role as blocking units in the warzone, accusing RS battalions of using intimidation and threats against Ukrainian Armed Forces personnel as motivation to continue their war in the east.
...
Reddit
Google+
Blogger
Pinterest
StumbleUpon
Telegram
WhatsApp
139