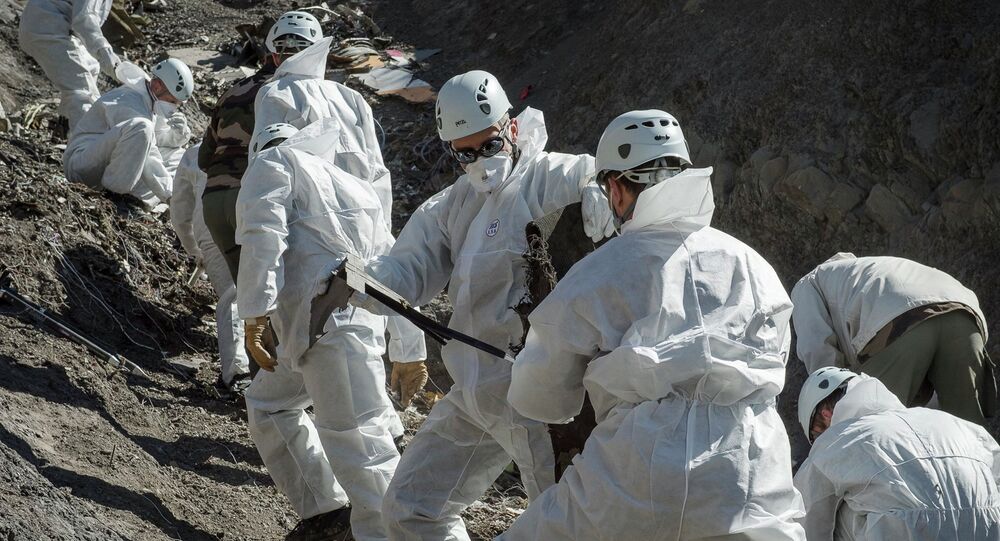 Search for Bodies at Germanwings Crash Site Over – French Prosecutors

According to French prosecutors, operation to retrieve human remains from the Alpine ravine after the crash of a Germanwings airliner has finished.

© AP Photo / Michael Mueller
Germanwings Co-Pilot Deliberately Crashed Plane, 2nd Black Box Data Shows
MOSCOW (Sputnik) – The operation to retrieve human remains from the Alpine ravine after the crash of a Germanwings airliner there has finished, French prosecutors said Saturday, adding that other recovery missions are not yet complete.

"The search for bodies has ended but that for the personal belongings of victims continues," a spokesperson for the Alpes-de-Haute-Provence prefecture said, as cited by the French newspaper Le Figaro.

Lufthansa has hired a specialized company to recover the debris from the Alpine ravine, Le Figaro quoted the prefecture spokesperson as saying. The operation will be overseen by a French public prosecutor and ecology watchdogs.

The Airbus A320 jet of Lufthansa's low-cost carrier Germanwings was on its way from Barcelona to Dusseldorf when it rammed into a mountainside in the French Alps on March 24, killing all 150 people on board.

By Thursday, investigators had retrieved both the cockpit voice recorder and the flight data recorder from the wreckage. Data from the "black boxes" indicated that co-pilot Andreas Lubitz had intentionally crashed the plane.

Marseille prosecutor Brice Robin said earlier this week they had isolated 150 DNA profiles from some 2,000 genetic samples retrieved from the crash site. It will take investigators up to five weeks to identify all victims of the crash, the official said.