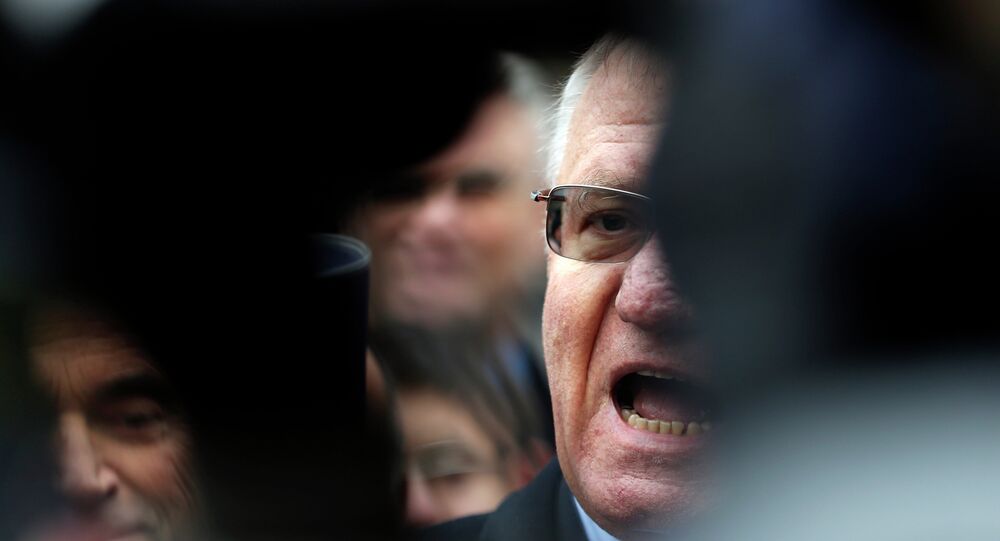 The decision to release and then call for the re-arrest of Serbian political figure Vojislav Seselj by The Hague Tribunal is an attempt to undermine and destabilize Serbia, according to Prime Minister Aleksandar Vucic.

Writing in the Serbian newspaper 'Politika', Vucic was heavily critical of the UN-backed International Criminal Tribunal for the former Yugoslavia (ICTY), saying the whole affair was being used as an attempt to "shake up" and undermine the current Serbian government.

© AP Photo /
'They Would Have to Carry Me': Former Serb Leader Balks at Arrest Claims

"Someone has started using Seselj as a bogeyman," he wrote, in reference to suggestions the radical party leader was intentionally released by officials who had planned to re-arrest him to test Serbia's international allegiances.

The Prime Minister hinted that the court's western backers were punishing Serbia over the country's refusal to condemn traditional ally Russia over the Ukraine crisis.

"When they do not like what Serbia is doing, that it has its own position, that it will not at someone else's request impose sanctions, that it wants to be friends and not quarrel with anyone — then they release a scarecrow out of the box expecting us to be afraid," Vucic said.

"This is no law, no justice, and Seselj has nothing to do with it. There are only misguided attempts to punish the Serbian government for its policies."

Serbia's Labour Minister Aleksandar Vulin echoed the same sentiment, saying the saga was an attempt to destabilize the country after prime minster Vucic referred to NATO "aggression" and spoke of former NATO attacks on targets in Belgrade.

'They Would Have to Carry me'

Seselj, who had been in custody in the Netherlands-based court since 2003, was on trial, accused of committing war crimes and inciting racial hatred during the Yugoslav wars of the 1990s.

Prosecutors are pushing for a 28-year sentence, however Seslj has denied all allegations.

He was released in November last year on medical grounds, however the ICTY yesterday ruled that comments made by Seselj following his release were in breach of his strict bail conditions, and ordered for his re-arrest and return to The Hague.

After being released in November, the radical party leader claimed he wouldn't return voluntarily.

Seselj confirmed his intention to stay in Serbia in an interview with Sputnik, saying he would fight for his right to remain in Serbia by legal means.

Vucic claims that Seselj's release from the Hague was #EU's plot against #Serbia. This begins to look very messy. http://t.co/ZLLNZUzhfO

"Of course, I won't be able to resist physically — I'm old and frail. But I will fight with legal means. They (The ICTY) must act in accordance with the rules of the court of law: initiate judicial proceedings, then I have to respond, and then appeal. And after my appeal is not upheld, they would have to carry me to the airport," he said.

Meanwhile the ICTY's decision to call for Seselj's re-arrest has been questioned by some legal experts who say argue that he may not have been in breach of his bail conditions.

In an interview with Sputnik, lawyer Branislav Tapuskovic said Seselj didn't say anything that could have affected the decision to temporarily release him from custody, saying that there may have been a political motive behind the ruling.

"He did not demand to be released. There is a feeling that he was released on purpose, to stir things up… Again, it turned out that events related to the Hague Tribunal, are used for political purposes."

Fellow lawyer Tomislav Visnjic backed up these claims in an interview with Sputnik, saying that the ICTY has never been consistent in deciding on the temporary release.

He said that often, the decision depends on the state of affairs in the country where the defendant is to return.

'They Would Have to Carry Me': Former Serb Leader Balks at Arrest Claims