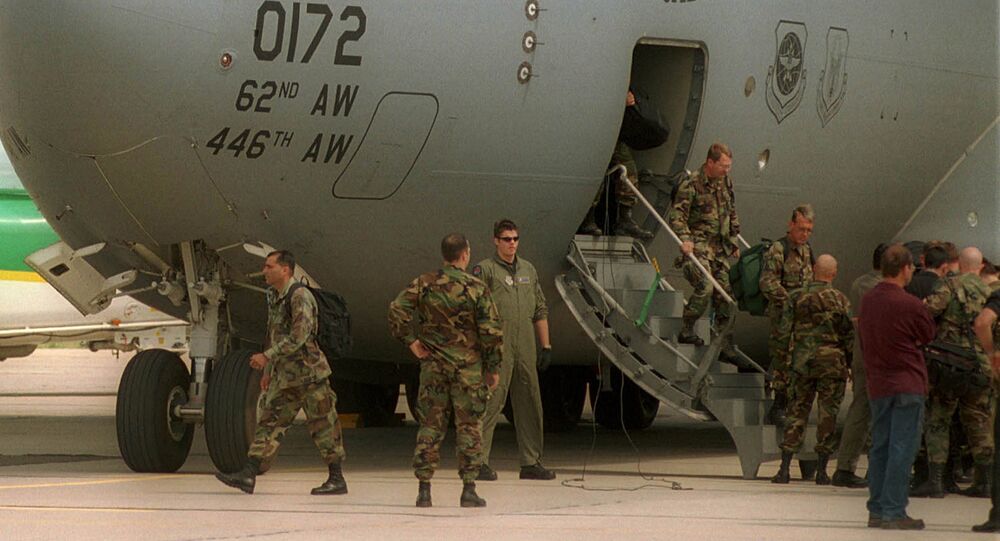 In April, 290 US paratroopers are expected to arrive in Ukraine in order to take part in joint military drills together with Ukraine's National Guard forces, according to the Ukrainian Interior Minister.

© Sputnik / David Hizanishvily
Boots on the Ground: US Military Instructors Arrive in Ukraine
US military instructors are expected to arrive in Ukraine on April 20, 2015 in order to train the country's National Guard, Ukrainian Interior Minister Arsen Avakov recently announced.

According to a statement published by Ukraine's Interior Minister Arsen Avakov on his Facebook Page, 290 American paratroopers will land at the Yavoriv Training Center near Lviv on April 20, 2015. There, according to agreements between Kiev and the US State Department, the 173rd Airborne Brigade Combat Team will participate in continuous joint military drills together with the Ukrainian National Guard. Such well-known battalions as "Azov," the Kulchytsky Battalion, "Jaguar," "Omega" and other military groups from Kiev, Kharkiv, Zaporozhye, Odesa, Lviv, Ivano-Frankivsk and Vinnytsia will take part in the exercises, Arsen Avakov elaborated.

Ukraine's Interior Minister revealed that the National Guard would be divided into three groups. Each group, consisting of 300 militants, would receive intensive training in an eight-week period. That means the American troops will be stationed in Ukraine for about six months. Those successfully completing the program will receive special ammunition and communications equipment from their "American partners."
Washington announced its plans to send US military instructors to Ukraine in February, 2015. It was expected that joint military exercises would begin in March, 2015. However, top US military officials later informed Kiev that the program had been postponed, adding that Washington would closely observe the Minsk peace process in eastern Ukraine.

© AP Photo /
US Plans to Send 300 Military Personnel to Train Ukrainian Soldiers
On March 19, Ukrainian President Petro Poroshenko had a telephone conversation with US Vice President Joseph Biden. According to the official website of President Poroshenko, Mr. Biden had informed the Ukrainian leadership about the decision of President Barack Obama to send US military instructors to the country in order to provide military training to Ukraine's National Guard forces.
In general, in 2015 Ukraine and its Western partners plan to conduct five rounds of military exercises on the territory of the country: three US-Ukrainian military programs (Fearless Guardian 2015, Sea Breeze 2015 and Saber Guardian/Rapid Trident 2015) and two Ukrainian-Polish exercises (Secure Skies 2015, and Law and Order 2015).

Fearless Guardian will take place at the Yavoriv Training Center between March and November, bringing together up to 2,200 personnel. Sea Breeze will be held in the Black Sea as well as at training areas of Odesa, Mykolaiv and Kherson between June and October. Almost 2,500 military servicemen will take part in the exercise. The Saber Guardian and Rapid Trident military drills will also be conducted in Yavoriv between July and October. The 25-day exercise will bring together up to 2,100 troops.