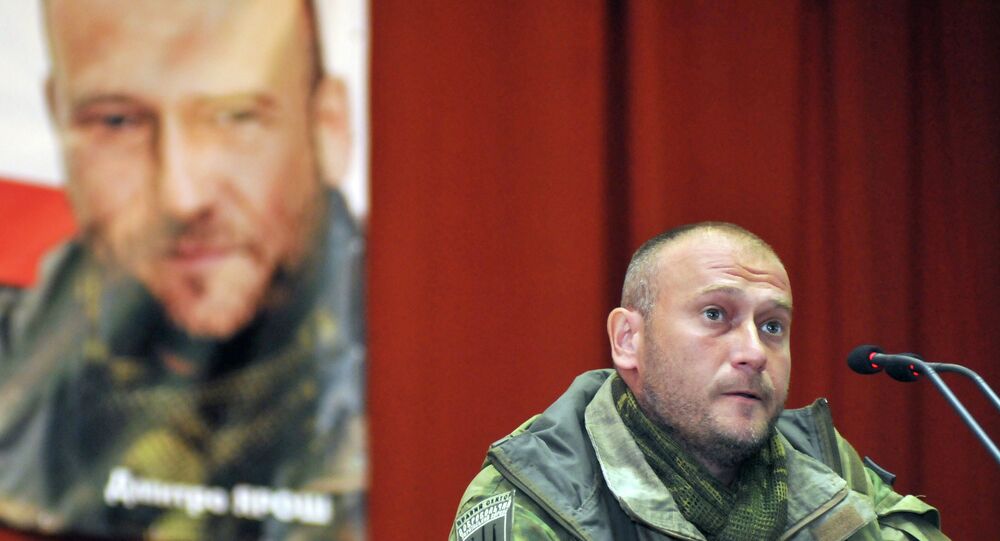 As part of an effort to get the country's volunteer battalions under his control, Ukrainian president Petro Poroshenko is said to have offered Right Sector leader Dmitri Yarosh a post in the Ministry of Defense.

© Sputnik / Alexander Maksimenko
No Ukrainian Governor Will Be Allowed to Have 'Pocket' Army - Poroshenko
Right Sector leader Dmitri Yarosh is said to have been offered a post in the Ministry of Defense in exchange for the integration of the movement's volunteer battalions into the Ukrainian armed forces, Ukrainian media have reported, citing MP and Ministry of Interior advisor Anton Gerashchenko.

"I can confirm that Dmitri Yarosh has received a proposal from the president to take up a position in the ministry of defense. I personally would welcome it if Yarosh were to come to work in the public sector," Gerashchenko said Thursday evening, speaking on Ukraine's Channel 5.

"I'll say, moreover, that Yarosh feels bored in the parliament. Plus, he was seriously wounded in battle. I would love to work with him in creating a voluntary defense association in Ukraine along the lines of the Estonian, Finnish or Swiss systems," Gerashchenko added.

The Right Sector leader, who was wounded in combat in January in Donetsk, has yet to confirm whether or not he will accept Petro Poroshenko's offer, although Ukrainian media have speculated that his appointment is a foregone conclusion. His responsibilities are to include the coordination of volunteer units with the Ukrainian military in eastern Ukraine.

© Sputnik / Vitaly Belousov
None of the Above:Poll Shows Ukrainians Don't Trust Leaders, Parties, Media
President Poroshenko has promised to place all voluntary fighting units under the formal command of the Ukrainian Armed Forces. Earlier this week, Right Forces battalion leaders confirmed that they have been offered to join the Ukrainian National Guard, agreeing on the condition that their units' structure and leadership would be preserved intact, Expert.ru explains. Plans to integrate radical right extremist battalions into the country's armed forces, aimed at reducing the risk of political destabilization in Kiev, have been criticized by experts, who note that initiative will only lead to the radicalization of the armed forces.

In November 2014, the Russian Supreme Court declared Right Sector to be an extremist organization, and its activity has been banned on the territory of the Russian Federation. Earlier, in March, 2014, Russian authorities issued an arrest warrant against Dmitri Yarosh for incitement of terrorism, and for his organization's combat operations in the First Chechen War against the Russian military.