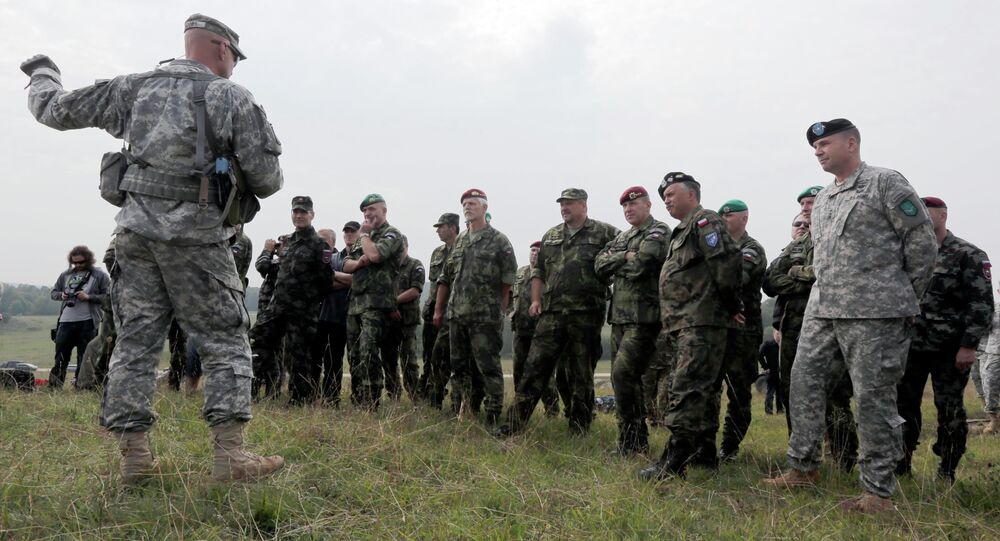 NATO’s transfer of American military contingent across Eastern Europe will be carried out this time in a demonstrative manner to show Baltic States and Eastern European countries that they are protected from alleged Russian aggression.

More than 100 armored vehicles and hundreds of soldiers will have to go about 1,800 kilometers across six European states to demonstrate to people living in the Baltic States, Poland and the Czech Republic, that they are "protected" from alleged Russian aggression, “Frankfurter Allgemeine Zeitung” reported.

© AFP 2021 / MICHAL CIZEK
Arms Supplies to Ukraine off NATO's Agenda - Czech Defense Minister
The march was called by the media a "Dragoon Ride" and is expected to reach its final destination, a military base in Bavaria, on April 1.

According to the German newspaper, the operation is a usual transfer of the US military forces, which participated in NATO exercises and are now returning to the location of their permanent deployment. The difference is that this time, the transfer is organized in a demonstrative way.

Armored vehicles and soldiers are usually transported by rail or sea, but now they are openly marching overland, guarded by a military aviation brigade from the air.

© REUTERS / Ints Kalnins
NATO Implementing Largest Reinforcement Since Cold War - Stoltenberg
NATO members Poland, Estonia, Latvia and Lithuania have repeatedly announced that they are seriously worried about an alleged threat from Russia with regard to the Ukrainian crisis, and called for an increased NATO military presence in Eastern Europe.

As reported earlier, the march also has another purpose, namely, cultural. The US military is expected to make stops and interact with the local population, which presumably, will give the American soldiers a chance to learn about Europe’s cultural diversity and build trustful relations within the alliance.

Latvia to Introduce Military Training for Students in Fear of Russia