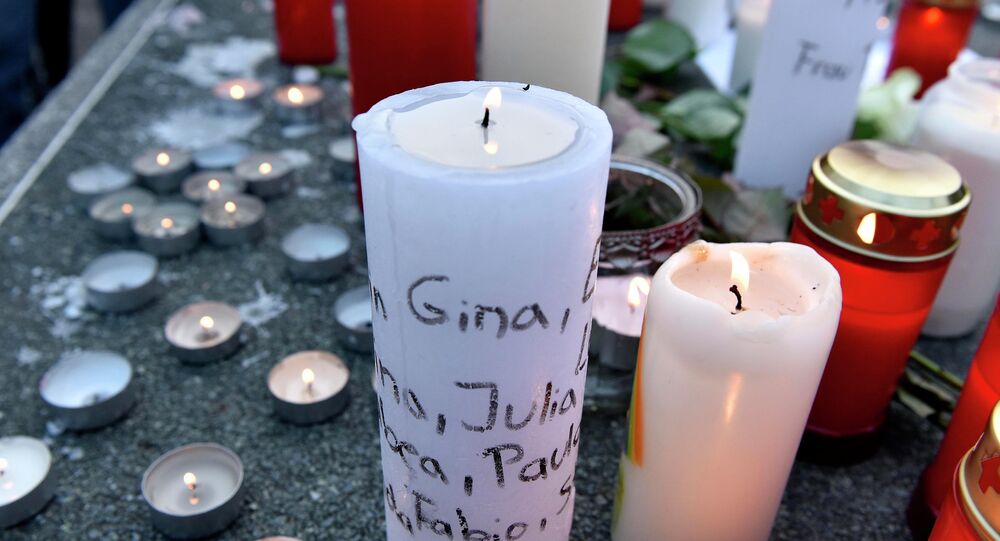 Germanwings 4U 9525: Terrorism Not Ruled Out as Investigation Begins

Air accident investigators in France will take charge of the labyrinthine investigation into why a perfectly sound aircraft could have crashed into the Alps without warning, with experts not ruling out terrorism at this stage.

French air accident investigators — the Bureau d'Enquêtes et d'Analyses pour la sécurité de l'aviation civile (BEA) — have begun the morbid process of marking the position of every scrap of metal, plastic and composite on the alpine mountainside between Digne and Barcelonette.

The first task of the rescuers in the coming days will be to recover the 150 bodies of the passengers killed on the Germanwings flight from Barcelona to Dusseldorf.

© AFP 2020 / DENIS BOIS /GRIPMEDIA / AFP TV
Lufthansa CEO Rules Out Technical Malfunction in Airbus A320 Crash
After the bodies have been recovered, investigators will seal the site to protect the scene so that every piece of debris from the crashed aircraft can be marked and run into a 3D composite image.

The 3D composite image will then be taken to a huge hangar where the aircraft will be 'reconstructed' in what is grimly called an 'exploded diagram' format. This will allow them to assess where most of the damage is.

The pilot was experienced, the plane was checked — so what could have happened to the #A320? http://t.co/J37vkD8ANF pic.twitter.com/sSb04vKTFx

In the case of MH17, largely believed to have been shot down over eastern Ukraine, all the parts were taken to the Netherlands, which was the country chosen to carry out the investigation.

This decision was arrived at — under International Civil Aviation Organisation (ICAO) rules — between the airline operator and the State of Occurrence (Ukraine). In that case, the debris of MH17 landed in a warzone, where it was unprotected and many items were moved or removed.

In the case of 4U 9525, the debris lies in challenging conditions in the French Alps — in rocky terrain, a three hour walk from the nearest road. The fact that all the parts are within one valley points to the obvious conclusion that most of the aircraft was largely intact just before hitting the ground.

Terrorism Cannot be Ruled Out

And this gives one clue as to why — although terrorism cannot be ruled out — that scenario is less likely. French interior minister Bernard Cazeneuve told RTL radio that the cockpit voice recorder found on Tuesday had been damaged but could still be used to find information.

He said all options remained open as to why a perfectly airworthy and much trusted Airbus A320 crashed, but a terrorist attack was not the most likely scenario.

German-operated A320s do not crash in the cruise. Not these days. This one is weird. #Germanwings

As it had been cruising at 38,000, if there had been an explosion at that height it would have ripped the aircraft apart — as in the case of MH17 — and the debris would have fallen over an extremely wide area. Secondly, most aircraft accidents do not occur mid-flight. As David Learmount, the operations and safety editor of Flightglobal, said on Twitter:

"German-operated A320s do not crash in the cruise. Not these days. This one is weird."

On the ground, the hunt goes on for the second black box — the Flight Data Recorder. That will be used to consider all the conditions of the running systems on-board — the position of the throttle, the autopilot mode, engine thrust, cabin pressurisation and much more.

The BEA — along with its British counterparts, the Air Accident Investigations Branch, based at Farnborough — are considered the best in the world at this type of investigation. Indeed the AAIB was given the task of downloading the data from the black boxes from MH17.

© AP Photo / Mstyslan Chernov
Draft Final Report on MH17 Crash Expected by End-June 2015
Between the two black boxes, investigators will quickly be able to find out why no mayday or distress call was made as flight 4U 9525 rapidly lost altitude for eight minutes, and why the cockpit crew did not change course or speed in those final moments.

The grieving families will not have to wait too long before an early indication of the fate of 4U 9525 is known. The actual cause of the accident will take painfully longer to emerge.

Lufthansa CEO Rules Out Technical Malfunction in Airbus A320 Crash