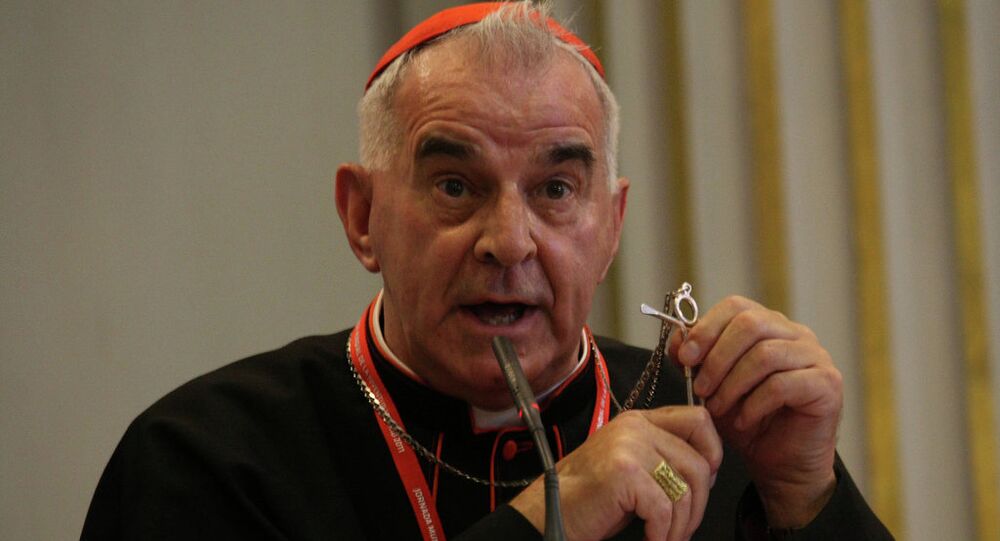 The former Catholic Archbishop of St. Andrews and Edinburgh, Cardinal Keith O’Brien, has resigned the rights and privileges of a cardinal, making him the first cardinal to do so since 1927.

© AFP 2021 / GIUSEPPE CACACE
Pope Francis Foresees His Papacy as Short-lived
Cardinal Keith O’Brien, who was Britain's most senior Roman Catholic cleric before stepping down from his position in 2013 following revelations of sexual misconduct, has resigned the rights and privileges of a cardinal, the Vatican announced in a statement on Friday.

"The Holy Father has accepted the resignation of the rights and privileges of a cardinal expressed in canons 349, 353 and 356 of the Code of Canon Law, presented by his eminence Cardinal Keith Michael Patrick O'Brien, archbishop emeritus of St. Andrews and Edinburgh, after a long period of prayer," read the statement from the College of Cardinals.

In February 2013 O'Brien was forced to resign by Pope Benedict after one former priest and three current priests alleged that he had engaged in inappropriate sexual behavior in a series of incidents dating back to the 1980s. As a result of the revelations, O'Brien did not travel to the Vatican for the conclave to elect Benedict's successor, Pope Francis. O'Brien had been the only British Roman Catholic officiary with a vote in the conclave.

As a result of Friday's announcement, the Cardinal can no longer take part in a future conclave or assist in the governance of the Church. "Cardinal O'Brien will also be reduced to a strictly private life with no further participation in any public, religious or civil events," said the Catholic Church of Scotland, which serves the 15.9 percent of Scots who describe themselves as Catholic. Despite relinquishing the associated rights and privileges, however, O’Brien will retain the title of cardinal.

© Flickr / Sean Rowe
Police Raid Catholic Premises in Oslo Amid Fraud Investigation
"I wish to repeat the apology which I made to the Catholic Church and the people of Scotland some two years ago now on March 3, 2013. I then said that there have been times that my sexual conduct has fallen below the standards expected of me. For that I am deeply sorry," said O'Brien in his statement on Friday.

Last April Pope Francis, after asking O'Brien to undertake a "period of prayer and penance," sent Archbishop of Malta Charles Scicluna to compile a report into the Cardinal's transgressions, which one of the priests Scicluna interviewed described as "hot enough to burn the varnish" off the Pope's desk. Earlier this week, it was confirmed by a spokesman for the Edinburgh archdiocese that Francis had received Scicluna's findings and was making a decision on O'Brien's future.

O'Brien is the first cardinal since 1927 to resign from the cardinalate, when French Cardinal Louis Billot resigned due to political differences with Pope Pius XI.

History and Celebration of Catholic Christmas: Facts and Details