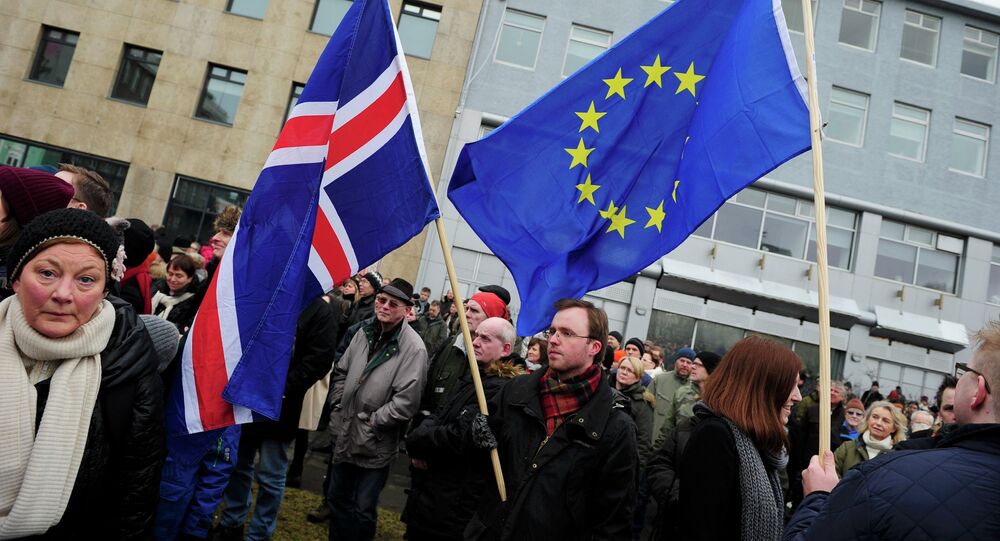 "The nature of the decision is both political and economic," François Asselineau said, explaining that Iceland has fought for its independence for centuries and values its freedom.

In terms of economy, European policies would be restrictive and counterproductive for the Icelandic economy, hurting one of its main industries: fisheries, Asselineau said.

He underlined that the Icelandic foreign minister’s statement has to be put in the wider context of European architecture, as the Icelandic nation can see the faults in the economic and social processes in Europe.

© REUTERS / Sigtryggur Ari Johannsson
Iceland’s Opposition Calls For Referendum on EU Bid
"I would also add a military aspect, because the EU and its parties have been the henchmen of the US in illegal wars in the Middle East and against Russia," Asselineau said.

According to Iceland's opposition parties, which include the Social-Democratic Alliance, the Left-Greens, the Pirate Party and Bright Future, the foreign minister's statement has no legal value and the country is still pursuing EU membership.

Last week, the country's former Foreign Minister and current Social Democratic Alliance parliamentarian Ossur Skarphedinsson told Sputnik that the decision to drop the EU bid was unconstitutional as the government had tried to circumvent parliament.

The Icelandic opposition put forward a resolution calling for a national referendum on the country's bid to join the European Union.

Iceland submitted an application to the EU in 2009 in the wake of the financial crisis. Formal negotiations on Iceland’s accession to the European Union began in 2010. However, after the country's 2013 elections, the coalition government of the Progressive and Independence parties decided not to pursue the bid, which sparked public protests.