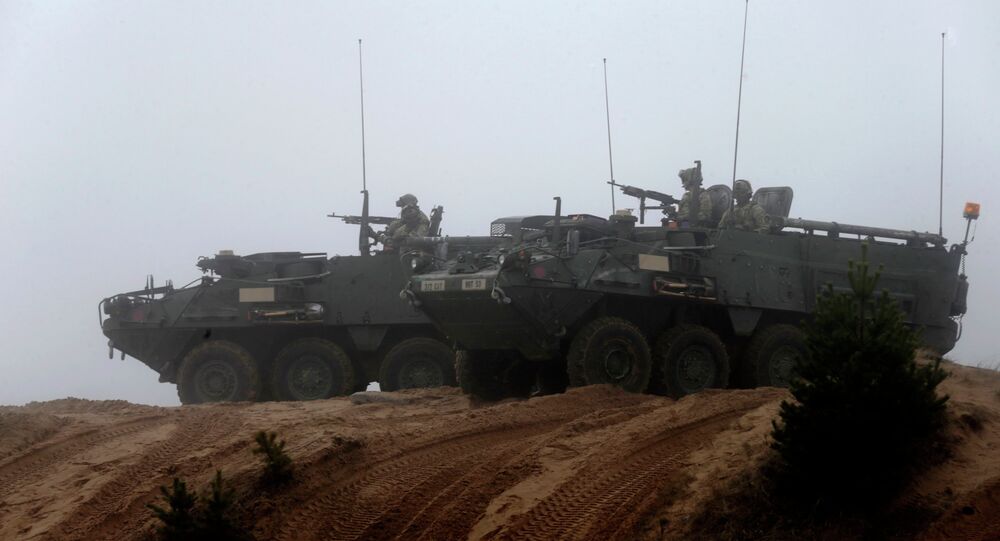 Prague's decision to allow a US military convoy to travel through the Czech territory has sparked public outrage in the country.

Earlier, on March 16, Prime Minister Bohuslav Sobotka announced that the Czech government agreed to allow the US military convoy to travel through the state's territory. Sobotka underscored that the decision would demonstrate solidarity of the Czech Republic with its NATO allies. The convoy of 120 US armored fighting vehicles, nicknamed "The Dragoon Ride," will cross the country between March 29 and April 1, demonstrating the manpower maneuverability of the alliance forces to Russia and Eastern European states.

According to Czech Republic's Defense Minister Martin Stropnicky, the convoy would consist of 516 personnel and 118 vehicles. It will cross the country on three routes and will unite in Prague-Ruzyne and then head to the military base in Bavarian Vilseck, Germany, through West Bohemia. Martin Stropnicky pointed out that the convoy's transfer is a common practice aimed at demonstrating the US commitment to its NATO allies. He noted that in 2014 there were almost 131 transfers of this type across the republic, including 1,631 foreign troops and 601 pieces of equipment.

However, Prague's decision sparked controversy amongst both Czech politicians and ordinary civilians alike. The Czech Communist party blasted the move as sheer "provocation," that could undermine the peace process in Ukraine. Vojtech Filip, head of the Czech Republic's Communist Party Morava emphasized that the long-anticipated Minsk agreement could be threatened by the NATO maneuvers. He said that he had received numerous letters from Czech civilians, opposing the "show of force." The Communist leader pledged to draw up a petition aimed against the conflict escalation on the European continent.

© CC0
US Convinces at Least One State Fighter Jets With Bombs Onboard Mean 'Freedom'
Czech Internet users also expressed their growing dissatisfaction with NATO's plans. Some web users even went so far as to slam Washington for spreading fascism. In the light of the Ukrainian crisis Czech civilians view NATO's "show of force" as a substantial threat to peace in the region.

She noted that Czech citizens, outraged with the government's initiative, called upon the organization to prevent the US military forces from entering the country, proposing to block up border posts, lie under wheels of the US's fighting vehicles or even to use the Molotov cocktails in order to stop the column.

NATO military drills in Eastern Europe could aggravate further tensions triggered by the conflict in eastern Ukraine, according to Eva Novotna. She expressed her deep concerns regarding possible provocations or accidents during the exercises that could flare up a full-scale military conflict in Europe.