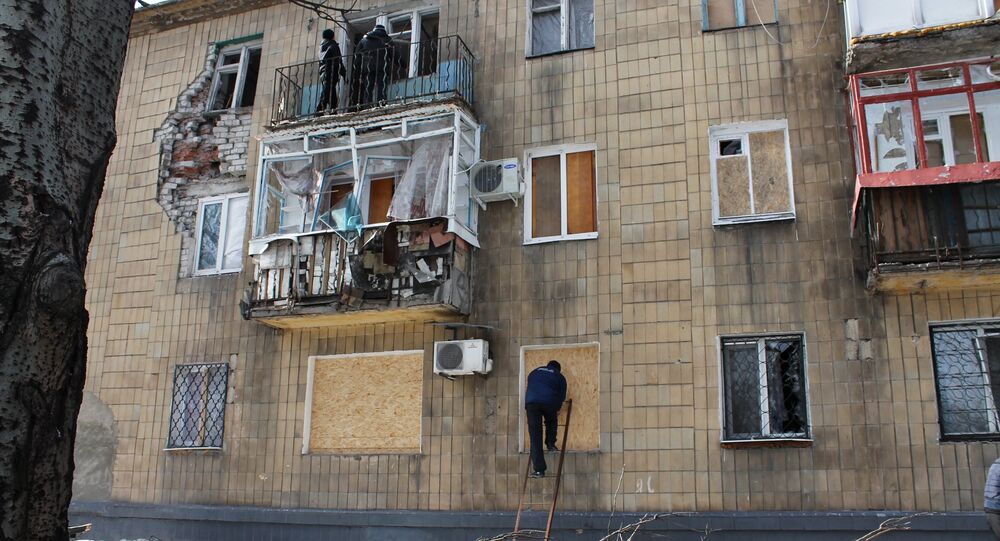 According to data gathered by HRW, from January 23 to February 12, 2015, the territories controlled by the independence supporters of Donetsk and Luhansk were hit by cluster munitions no less than seven times. The attacks killed a total of 10 civilians.

According to data gathered by HRW, from January 23 to February 12, 2015, the territories controlled by the independence supporters of Donetsk and Luhansk — including the cities of Luhansk, Komsomolske, Stakhanov and the settlement of Starobesheve — were hit by cluster munitions no less than seven times. The attacks killed a total of 10 civilians.

"For two attacks that hit rebel-controlled places, one in the city of Luhansk and another in Stakhanov, the direction and minimum range of the rockets used exclude the possibility that forces in rebel-controlled territory launched the cluster munitions," HRW said.

© Sputnik / Gennady Dubovoy
No True Ceasefire Reached in Eastern Ukraine – Deputy Militia Commander
According to the HRW over the same period Kiev-controlled territories in the region were hit by cluster munitions three times resulting in the death of 12 civilians.

"Neither side should use these widely banned weapons; they affect a large area, endangering nearby civilians, and unexploded submunitions pose a risk to civilians long after the attack," Ole Solvang, senior emergencies researcher at HRW, said.

The HRW called on the authorities of Ukraine to "immediately stop" using cluster munitions as well as to investigate and bring to justice those in the Ukrainian Army who are responsible for using prohibited weaponry in populated areas.

© Sputnik / Valeriy Melnikov
LPR Head Notes Breakthrough in Contact Group on Ukrainian Reconciliation
The organization noted that Ukrainian authorities have taken some steps to investigate the use of cluster munitions revealed in an October 2014 report but "the investigation has been inadequate and more needs to be done."

The organization also called on Russia to "use its influence over the forces in Ukraine" to put an end to the use of cluster munitions.

Cluster munitions are a type of explosive weapon that contains and releases large numbers of smaller submunitions over a wide area. The use of cluster bombs is prohibited by a 2008 Convention on Cluster Munitions signed by a total of 116 countries.

HRW Bashes Kiev Over ‘Cursory’ Probe Into Cluster Bombs Use