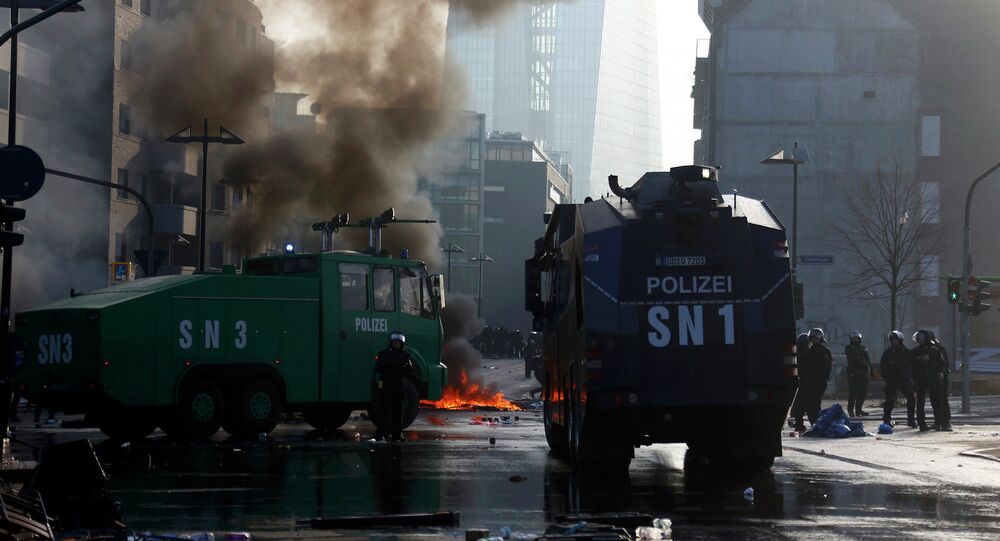 Germany's Interior Ministry has condemned comparisons of Wednesday's Blockupy protests in Frankfurt to Ukraine's Maidan, blaming protesters for the escalating violence which resulted in dozens of injuries among police officers and protesters alike.

© AP Photo / Michael Probst
Frankfurt Police Crackdown on Austerity Protests Has Familiar Feeling
In an interview for German television channel ZDF on Thursday, German Interior Minister Thomas de Maiziere blamed protesters for the escalation of violence at Wednesday's Blockupy protests, and slammed protest supporters' attempts to point out the double standards in media coverage of the Frankfurt protests and the events of Maidan in Kiev last year.

"We knew that there would be violence; it was known in advance in the [activist] scene. Therefore, organizers have no right to pretend that they are innocent," Maiziere noted. "It was truly awful. Police officers have been seriously injured," the minister added.

The minister also voiced his irritation over social media comparisons of coverage of Wednesday's events and those of Maidan in Ukraine in 2014, which led to similar violence and the overthrow of the government of Viktor Yanukovich. "What angers me especially is the attempt to justify the use of violence, to make any comparisons to Maidan. There are no excuses for such forms of violence," Maiziere noted.

German commentators have pointed to what they say are double standards in media reporting on Ukraine's Maidan and the Blockupy events; German Bundestag Die Linke MP Heike Hansel noted on Twitter that while media largely condemned protesters in Wednesday's violence in Germany, "gusts of smoke during Maidan in Kiev were considered a sign of the liberation movement for the media."

© REUTERS / Ralph Orlowski
Frankfurt Rallies Unlikely to Cause Review of Austerity Policies– SSP
Commentators have also questioned police claims that protesters were to blame for the escalation of force. Blockupy spokeswoman Hannah Eberle told Sputnik Wednesday that "over the last several days, police already created a state of emergency. They have been patrolling the area on horses; over 25 water cannons have been put into operation. I think police stirred up tensions from the very beginning."
© REUTERS / Kai Pfaffenbach
Over 20,000 Take Part in New Rally Against Austerity Measures in Frankfurt – Blockupy
The Blockupy anti-austerity protests, which rocked the western German city of Frankfurt on Wednesday, have resulted in the injury of over 90 police officers, with 16 protesters arrested and 100 injured by tear gas, according to various sources. A 6,000 strong morning rally and a 20,000 person evening march took place in the city Wednesday to protest Eurozone austerity measures, particularly those being implemented in Greece. The protests coincided with the opening of a brand new, $1.4 billion headquarters of the European Central Bank in the city.
...
Reddit
Google+
Blogger
Pinterest
StumbleUpon
Telegram
WhatsApp
413

Frankfurt Rallies Unlikely to Cause Review of Austerity Policies– SSP

Over 20,000 Take Part in New Rally Against Austerity Measures in Frankfurt