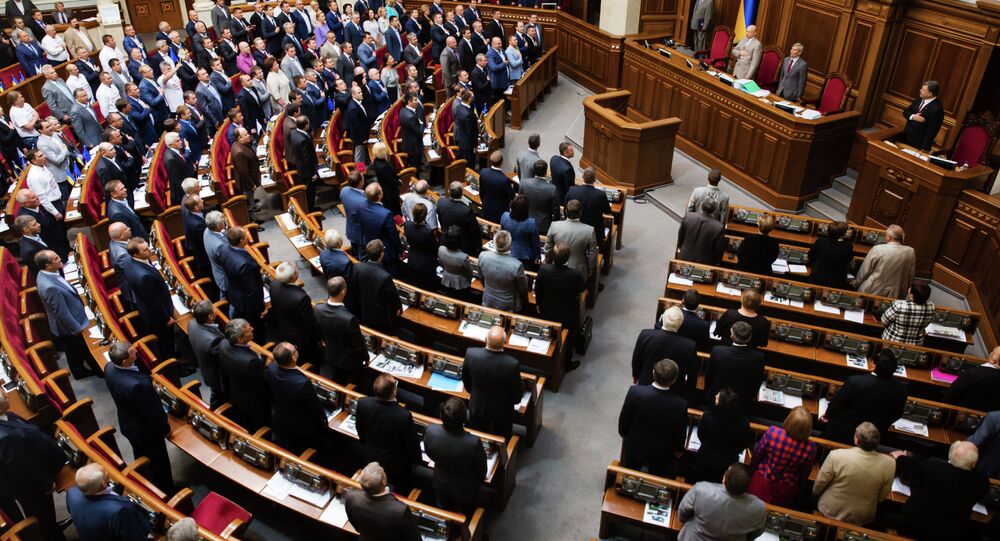 Three bills aimed at declaring the self-proclaimed people's republics of Donetsk and Luhansk as "temporarily occupied" were passed in the Ukrainian parliament.

KIEV (Sputnik) – The parliament of Ukraine passed Tuesday three bills aimed at declaring areas under control of self-proclaimed authorities in eastern Ukraine “temporarily occupied” until they hold local elections in line with the Ukrainian law.

© Sputnik / Irina Geraschenko
Kiev to Negotiate Only With Donbas Officials Elected Under Ukraine's Law
The “temporarily occupied” self-proclaimed people’s republics of Donesk and Luhansk can get the special administrative status only after holding elections in line with the laws of Ukraine and under supervision of international monitors.

The parliament has also approved a list of areas to which the special status will be applicable.

Moscow said Monday that Kiev’s initiative “distorts the very essence of the Minsk agreements by introducing a whole array of additional preconditions that have never been discussed before.”

© Sputnik / Nikolay Lazarenko
Kiev Could Make Final Decision on Donbas Special Status on March 17-18 - Reports
The leaders of Russia, Ukraine, France and Germany worked out a set of measures on February 12 aimed at putting an end to the hostilities in eastern Ukraine. One of the provisions said that Kiev authorities would work on the decentralization of power, which could result in more liberal arrangements for Donetsk and Luhansk.

Initially, a law granting special status and broader autonomy to certain parts of the breakaway regions was introduced by Kiev in fall 2014 but was abolished shortly afterward.

According to Security Council's Deputy Secretary Mykhaylo Koval, the special status law will not be applicable to the areas captured by Donbas militia after September 19, 2014.

Ukraine to Consider Bill on Special Status Territories on Tuesday