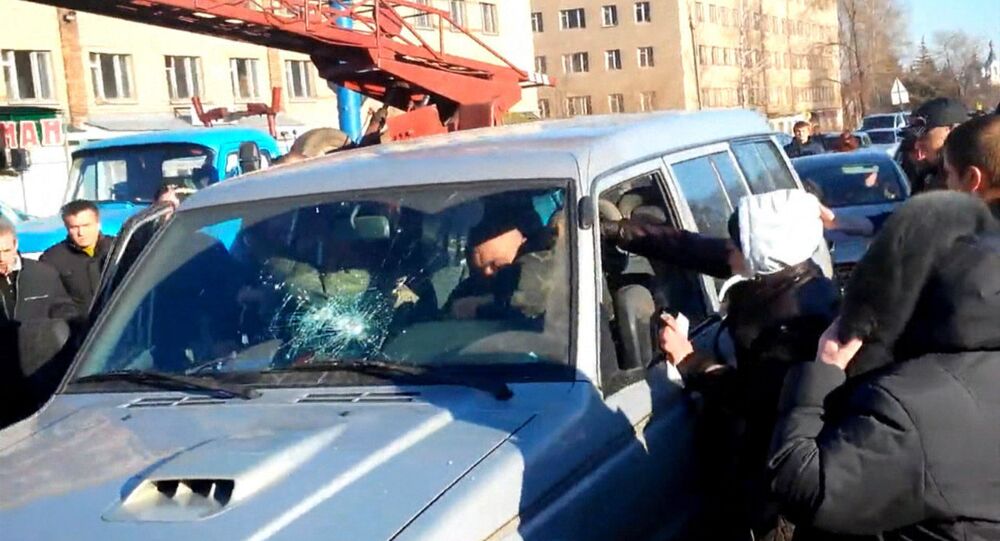 Ukrainian authorities gave orders to the police of Konstantinovka to use deadly force to disperse the crowd of local residents, who came to protest against Ukrainian army personnel stationed in the town, after two soldiers, driving an armored vehicle, hit a woman with two children.

Police of the Ukrainian town of Konstantinovka were given orders to use deadly force towards local residents, Anton Gerashchenko, adviser to Ukraine’s Minister of Internal Affairs, told channel “112 Ukraina”, Lenta.ru reported.

Residents of Konstantinovka came to protest against Ukrainian army personnel stationed in the town, after two soldiers, driving an armored vehicle, hit a woman with two children on Monday.

The armored vehicle drove into the oncoming lane, knocked down traffic lights and ran into people standing on the sidewalk. As a result, one child died on the spot, the second had minor injuries and the woman was hospitalized in a serious condition.

Following the incident, the crowd of local residents gathered in front of a dormitory, where Ukrainian military personnel are stationed, and started a protest. The angry crowd was throwing stones at the soldiers’ dwelling and vehicles, as well as shouting insults at them.

To subdue the crowd, the law enforcement authorities of Konstantinovka were given orders to use deadly force, if necessary, Anton Gerashchenko, adviser to Ukraine’s Minister of Internal Affairs, told channel “112 Ukraina”.

© Sputnik / Andrei Stenin
Ukraine’s Right Sector Goes Rogue, Aims at Derailing Minsk Process
“If someone in Konstantinovka will speak against the Ukrainian authority with arms in their hands, using this traffic incident to cause public disturbance, first there will be a warning shot, then orders will be given to shoot to kill,” Gerashchenko said.

Militants of the Right Sector, a nationalist paramilitary faction, also arrived in Konstantinovka to “bring order”, local resident Alexander told RT. Although the Ukrainian authorities said that the situation in the city was under control, Alexander said he could hear gunfire earlier today.