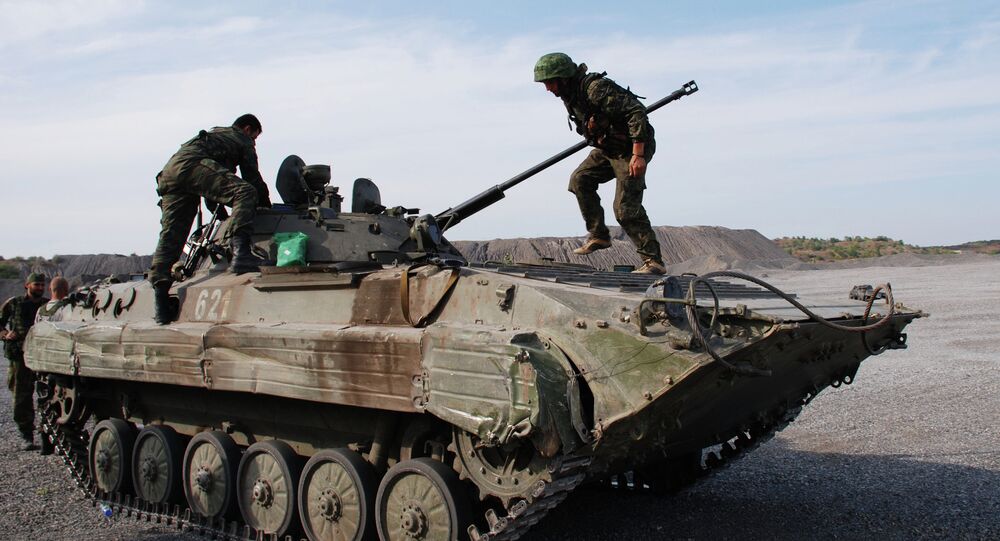 A deputy military commander of DPR said no true ceasefire was reached in eastern Ukraine. Only within the last 24 hours positions held by the DPR self-defense forces came under fire 32 times, three people killed and three injured as a result.

DONETSK (Sputnik) – De-facto, no true ceasefire has ever been reached in eastern Ukraine, a deputy commander of the self-proclaimed Donetsk People’s Republic’s militia said Monday.

Positions held by the DPR self-defense forces came under fire 32 times in the past 24 hours, Eduard Basurin said. Three militia members were killed and three injured as a result.

© AP Photo / Efrrem Lukatsky
Ukraine Continues to Strengthen Its Army Despite Ceasefire - Poroshenko
“In general, sporadic fire at our positions has never ceased. The majority of such incidents take place near the city of Donetsk and in the south, where, de-facto, no ceasefire has ever been reached since the Minsk agreements came into force,” he told reporters.

He called on the Organization for Security and Cooperation in Europe (OSCE) that had deployed a large group of monitors to the area to “immediately take all available measures to prevent provocations.”

The republic's military spokesman also reiterated his appeal to Kiev-led forces to avoid steps that lead to the escalation of conflict.

"We are confident these actions are a road to nowhere," Basurin said.