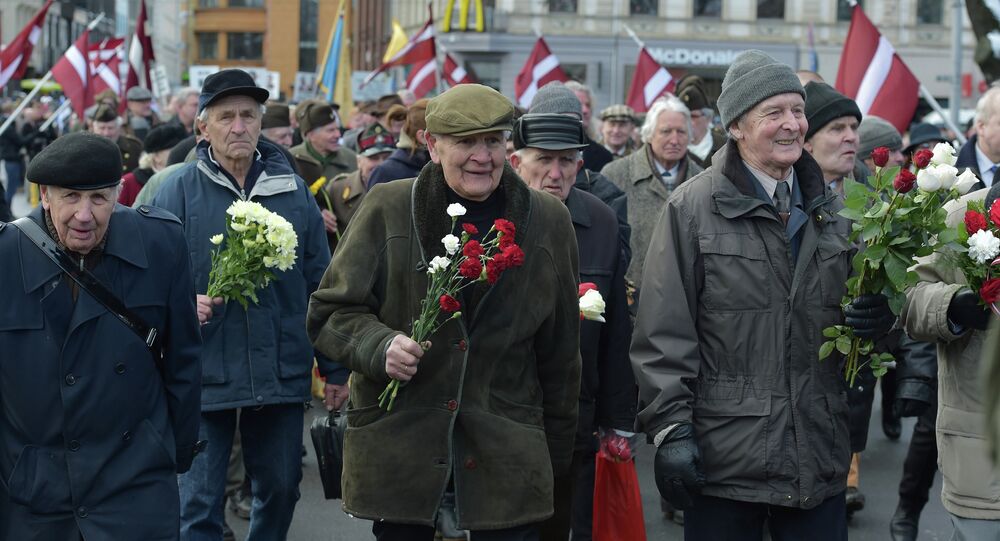 Cornelia Kerth, a representative of the Left Party in Germany, said Waffen-SS veterans’ marches should never take place. She said the party was outraged by annual Nazi veterans' marches in Riga.

MOSCOW (Sputnik) — Waffen-SS veterans' marches, similar to the one held in the Latvian capital of Riga on Monday, should be prohibited, Cornelia Kerth, a member of the Left Party in Hamburg, Germany, told Sputnik.

© Sputnik / Ilya Pitalev
Glorification of Nazism on 70th Anniversary of WW2 ‘Abhorrent’
"Marches of Waffen-SS veterans in Germany are prohibited and we think that they should certainly be forbidden in the countries that have suffered from Nazism," Kerth said.

She said that the party was outraged by annual Nazi veterans' marches in Riga and spoke against the Riga rally in 2014.

However, Kerth said, that Left Party members had learned that the local government opposed protests against Waffen-SS marches.

© AP Photo / Roman Kosarov
Europe Tolerates Nazis If They Are Against Its Enemies – Political Analyst
"We don't want the Waffen-SS marches either in Germany, or in any other country," Kerth said.

The annual Nazi veterans' parade has been held in the Latvian capital every year on March 16 since 1998.

Riga's mayor Nils Usakovs said earlier on Monday that some 1,000 people took part in the march and thanked those citizens who did not participate in the rally.