Bundestag member Sevim Dagdelen criticized Berlin for violating the political and historical taboo by supporting the government in Ukraine, which comprises the Nazis.

“We know that the right-wing party, whose headquarters is located in Dortmund, calls to participate in the Nazi march and is its co-organizer,” Dagdelen said. 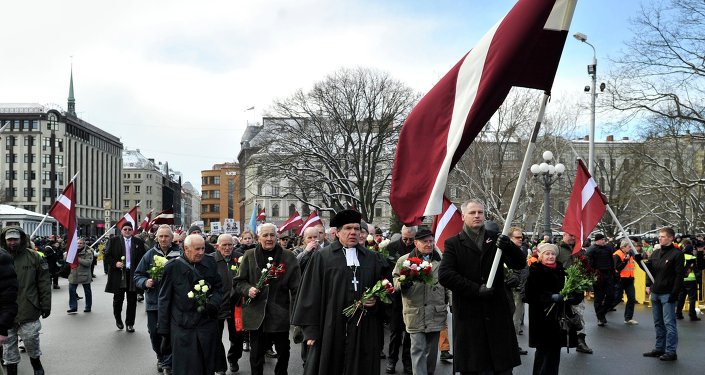 © AP Photo / Roman Kosarov
Germany Backs Latvia’s Move to Ban Ministers From Joining Riga Nazi March
“The German Federal Government should absolutely clearly and unequivocally condemn the march, held in honor of the collaborators with the Nazis, and call it by its real name — the Nazi and the fascist one,” Dagdelen pointed out.

Dagdelen also stressed that the German federal government violates the political and historical taboo by supporting the government in Ukraine, which comprises the Nazis, such as members of the Svoboda party.

© AFP 2019 / ILMARS ZNOTINS
Annual Nazi Vets Parade in Riga May Escalate Into Violence - US Embassy
Veterans of the Latvian Legion, a unit commanded by the Nazi SS during the World War II, have staged a parade in central Riga every year since 1991, when the Soviet Union collapsed. The date is linked to the March 16, 1944 battle between the legion and the Soviet Army.

Last year, the Latvian government prohibited the country’s ministers from participating in the parade. Latvian Environment Minister Einars Cilinskis, who planned to participate in the parade in 2014, was fired.