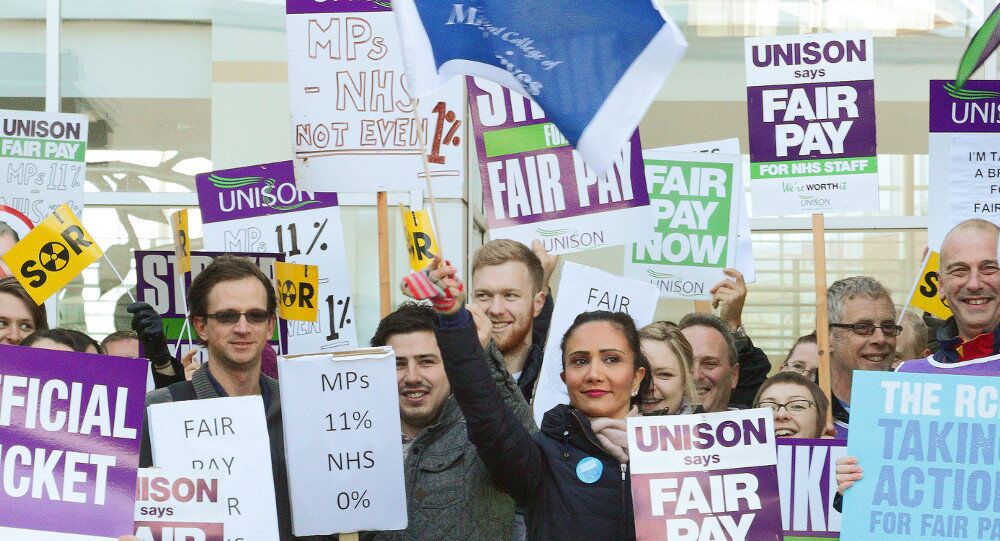 Tens of thousands of public service workers are on strike in Northern Ireland, bringing the province to a standstill amid anger over the latest budgets cuts and reforms to the segregated working practices which are unique to the region.

Health and social services, schools, bus and train services and the civil service are all affected as workers take action to protest against what unions describe as "unsustainable cuts which put the public and their services at risk and which will result in massive job losses".

Northern Ireland has a unique system of public sector working, owing to the province's segregation into two blocs: the — Irish nationalist/republicans (mainly Roman Catholic) and unionist/loyalist (mainly Protestant). As a result of the deep-rooted nature of the segregation, the civil service in Northern Ireland is much larger — per capita — than the rest of the UK.

Division of jobs across the public sector has led to over-manning over many years, resulting in the Stormont House Agreement, between the British and Irish Governments, and a majority of parties that make up the Northern Ireland Executive.

The Agreement, published in December 2014, contains measures to address the long-term structural financial difficulties in Northern Ireland's budget. It also calls for improvements to the efficiency of the civil service and the wider public sector to reduce administrative costs.

Under the agreement, the Northern Ireland Executive undertook a comprehensive programme of public sector reform and restructuring, including changing "structural differences in relation to the cost of managing a divided society, reduce pay bill costs, such as a reduction in the size of the Northern Ireland Civil Service and the wider public sector, and the extension of shared services".

However, unions across Northern Ireland have hit back at the proposed cuts and changes to their working terms and conditions. UNISON Northern Ireland regional secretary Patricia McKeown said:

"The spotlight now needs to move to the culprits who are responsible for this growing crisis in public services."

They fall into three categories:

"The UK government for slashing the block grant and attacking the welfare state; our own government for producing a devastating set of cuts in response; employers in areas such as health and social services who have backed the proposals by producing cuts to services which put people at permanent risk."

Confidence in Political System at an All-Time Low

She said confidence in our political system is at an all-time low. "If our politicians wish to restore confidence in a system which could work if they demonstrated that they really have the best interests of the people at heart, then now is the time to reverse the damaging decisions.

"Workers and the public alike are demanding their rights."

The campaign will continue until decisions are taken by those in power which protect the people rather than rob them of their rights," said McKeown.

Poverty in Britain - Things are Getting Even Worse