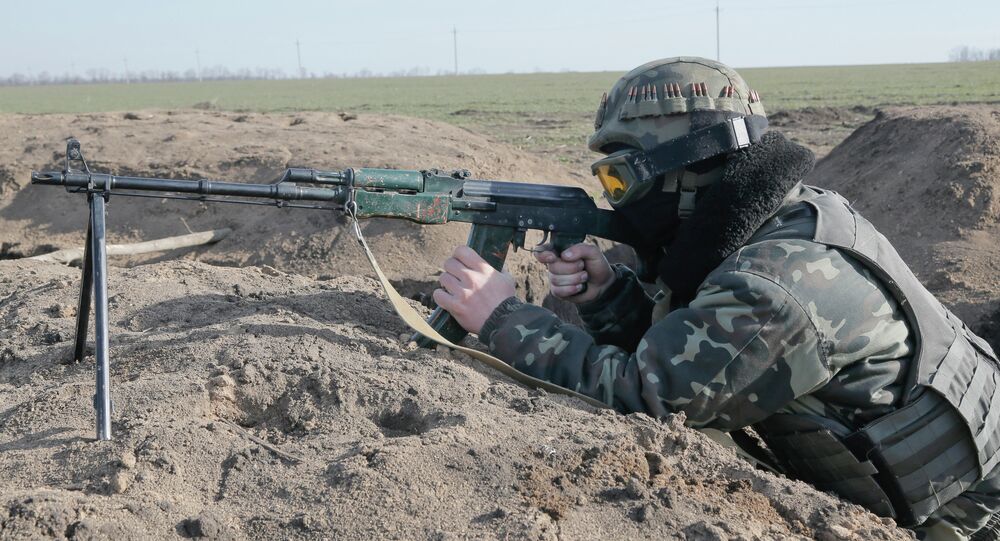 Kiev troops respect the Minsk ceasefire agreement 90 percent of the time, but some problem zones remain, head of the self-proclaimed people's republic of Donetsk announced.

MOSCOW (Sputnik) – Head of the self-proclaimed people's republic of Donetsk (DPR) has announced that Kiev troops respect the Minsk ceasefire agreement 90 percent of the time, but some problem zones remain.

According to Alexander Zakharchenko, fighting continues in the Donetsk Airport, the village of Shirokino and the Horlivka area.

"I noticed that shooting takes place either after the rotation [of troops] in the evening, or when a two-week rotation takes place – fresh divisions come in and intensive shelling takes place for about three or four days. Then the ceasefire is restored again," Zakharchenko said on Friday as quoted by the Donetsk News Agency.

Alexander Maximenko
US Journalist Reveals Nazis Fighting Alongside Pro-Kiev Battalion in East Ukraine
DPR announced on Thursday that observers from the Organization for Security and Co-operation in Europe (OSCE) and the Red Cross missions deployed in Ukraine had to leave the Donetsk airport that day amid fire from the positions held by Kiev forces.

Also on Thursday, Ukrainian President Petro Poroshenko announced that his country continues to build up its military potential and defense capability, having resumed regular military training, while at the same time adhering to the Minsk truce.

Signed on February 12, the Minsk agreements stipulate a ceasefire between Kiev forces and DPR and LPR (self-proclaimed people's republic of Luhansk) militia, as well as the creation of a buffer zone through the withdrawal of heavy weaponry from the line of contact between the two sides and an all-for-all prisoner exchange.

The ceasefire came into force on February 15, but some violations have since been reported.

This is the second ceasefire enforced in the conflict region of southeastern Ukraine, where Kiev forces launched a military operation in April, 2014. The first truce, agreed in Minsk in September, 2014, failed to hold.