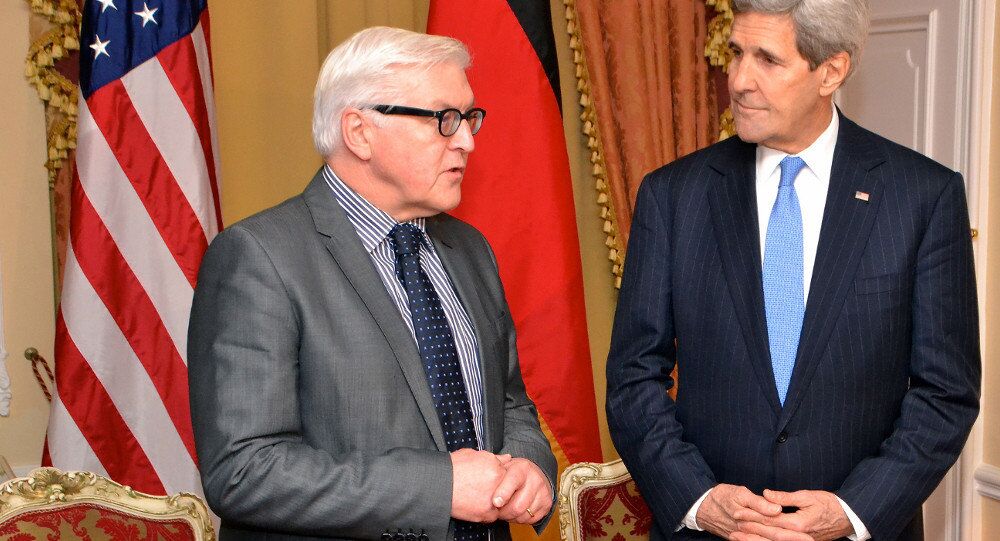 German Foreign Minister Frank-Walter Steinmeier has told his US counterpart John Kerry that it is too early to take any pride in the western strategy towards the Ukraine crisis, just days after accusing the US of "dangerous propaganda" over Ukraine.

Steinmeier, speaking on a visit to the US, said to Kerry at a joint press conference in Washington: "It is far too early to pat our shoulders and take pride in what we've achieved."

His comments come days after an official in German Chancellor Angela Merkel's offices had complained of US Air Force General Philip Breedlove's "dangerous propaganda" over Ukraine, and that Steinmeier had talked to the NATO Secretary General Jens Stoltenberg about him.

"It's true that I asked in two instances, in which the information we had from our sources was not entirely consistent with the information that came from the United States or NATO," Steinmeier told a European Union foreign ministers meeting in Riga, earlier this week.

False Information from the US

Steinmeier hinted that "false information" had been used by the US to hype up the situation in Ukraine and that some people within the European Union believed the crisis is being promoted by the US, according to an article in the German magazine Der Spiegel.

Germany Has Had Enough With US Neocons: Berlin "Stunned" At US Desire For War In Ukraine http://t.co/zRa5N2uu4j

Der Spiegel reported that German government officials had been taken by surprise when Breedlove said on February 25 that Russian President Vladimir Putin had "upped the ante" in eastern Ukraine. "What is clear is that right now it is not getting better. It is getting worse every day," Breedlove said in Washington.

German officials said information from their intelligence agency and other sources had stated that a ceasefire agreed in Minsk was shaky but holding.

Steinmeier's comments come in the week that a former NATO intelligence analyst admitted that the crisis in Ukraine stems from as far back as 30 years, when the United States "deliberately sabotaged" relations between Europe and Russia.

Lieutenant Commander Martin Packard said: "The current crisis in Ukraine stems from as far back as 1986, when the United States saw an opportunity to model itself as the new single world superpower at the close of the Cold War and saw friendly Russian overtures to Western Europe as a threat."