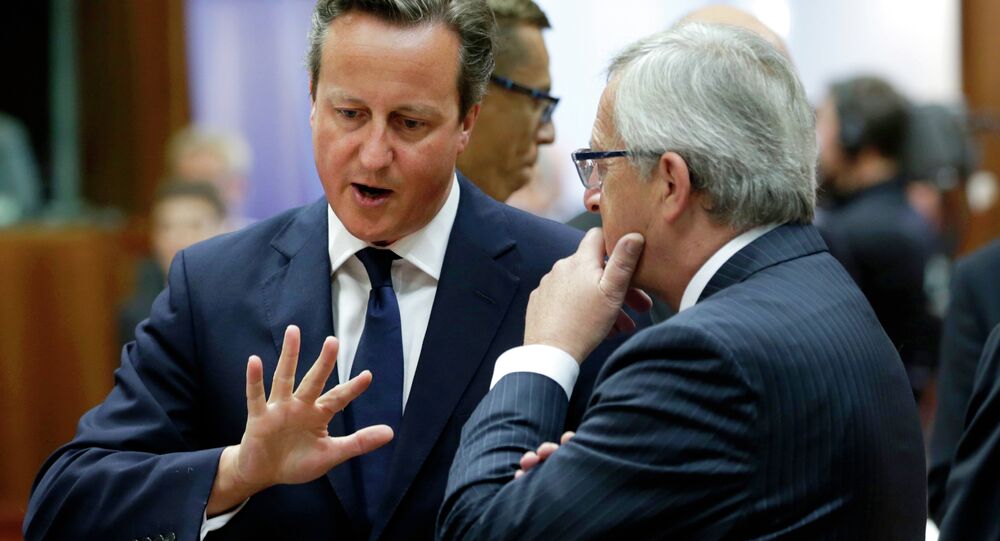 Sending shock waves throughout Europe, the president of the European Commission argued on Sunday that the European Union should establish its own army to counter Russia. The proposal has already received strong dismissals from British leaders, who say the idea has “no prospect,” and accuse its enthusiasts of living in a “fantasy world.”

© AP Photo / Michael Sohn
Muscle Flexing? Pan-European Army Will Show Russia EU's Stance on Values
“Our position is crystal clear,” a UK government spokesperson said, “that defense is a national – not an EU – responsibility and that there is no prospect of that position changing and no prospect of a European army.”

This was in response to the European Commission’s president, Jean-Claude Juncker, who proposed such an organization on Sunday.

“A common army among the Europeans would convey to Russia that we are serious about defending the values of the European Union,” Jean-Claude Juncker told German newspaper Welt am Sonntag on Sunday.

Juncker, the former prime minister of Luxembourg, has long supported the idea of a joint European army. He argues that such a military would help establish a unified foreign policy for the region, and help strengthen the notion of Pan-European nationalism.

“Such an army would help us design a common foreign and security policy,” he said, adding that, “Europe’s image has suffered dramatically and also in terms of foreign policy, we don’t seem to be taken seriously.”

© Flickr
Idea of Creating Pan-European Army Targets Russia – German Opposition
Part of that image problem may lie with the Commission president himself. Allegations emerged last year that during his time as Prime Minister of Luxembourg, Juncker provided a tax haven for various companies. A separate scandal in 2013 forced him to resign as prime minister. That controversy centered on the allegations that he had failed to prevent illegal activity within government security agencies, including phone-taps and corruption.

Even aside from Juncker’s personal troubles, the British government has always been wary of the EU, and the Greek economic crisis did nothing to help that caution.

“A European army would be a tragedy for the UK,” Mike Hookam, defense spokesman for the UK Independence Party, told the Guardian. “We have all seen the utter mess the EU has made of the Eurozone economy, so how can we even think of trusting them with this island’s defense?”

© Flickr / Andreas Nowak
Germany Supports Idea of Creating Pan-European Army
Several other British officials have shown a similarly hostile opposition to the proposed European army, already hinting at just how inefficient such a jumbled military would be.

Principally, opponents of the plan point to the fact that European interests are already protected by NATO, and that the creation of a European military would only interfere with existing defenses. In addition, a European army would draw forces from each of the member states, and that process could draw British troops away from territories which broader Europe would have no interest in defending.

“If our nations faced a serious security threat, who would we want to rely on – NATO or the EU?” Conservative politician Geoffrey Van Orden told the Guardian. “The question answers itself,” he said.

Hookem points out that soldiers could be pulled from Gibraltar or the Falkland Islands. Hookem also suggested that a Pan-European military could drag British troops into the conflict in eastern Ukraine.

Creation of a Pan-European army would be:
Voted: 1
All polls
The proposal also comes amid a push by the British government to decrease defense spending. A report released by the Royal United Services Institute on Monday announced that as many as 30,000 military personnel could be dismissed by the end of the decade.

While the UK seems steadfastly against the proposal, Germany has had a decidedly different reaction. Defense Minister Ursula von der Leyen released a statement saying “our future as Europeans will one day be a European army.” Whether that determination remains enough to pursue the project without British backing remains to be seen.

“The EU’s defense ambitions are detrimental to our national interest, to NATO, and to the close alliances that Britain has with many countries outside the EU,” Van Orden said. “Not least the United States, Gulf allies, and many Commonwealth countries.”

Meaning if Juncker wants his army, he may need some of that laundered, Luxembourger tax money to fund the whole thing himself.