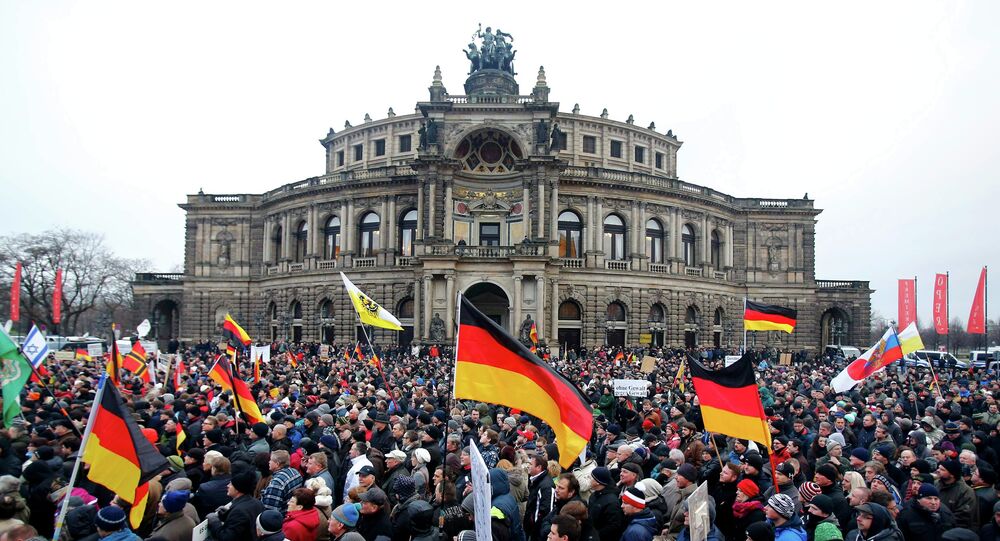 The movement's offshoot Legida will hold a similar demonstration in the city of Leipzig. Counter-demonstrations for tolerance, organized by NoLegida and "Leipzig nimmt Platz", are also expected.

The movement's offshoot Legida will hold a similar demonstration in the city of Leipzig. According to the LVZ-Online web portal, the march, set to begin at 16:30 GMT, is expected to face counter-demonstrations for tolerance, organized by NoLegida and "Leipzig nimmt Platz" (Leipzig Takes Place) groups.

Last Monday's Pegida march brought together some 6,000 people in Dresden.

© REUTERS / Peter Nicholls
Pegida Protesters in Newcastle Largely Eclipsed by Counter-Demonstrators
The group was established in Dresden in October 2014, rapidly snowballing and taking some 20,000 supporters to the streets in late December. However, counter-rallies have often outnumbered Pegida's marches.

Pegida is often accused of xenophobic and Islamophobic sentiments. The group's leaders, however, deny having a far-right ideology and claim to only seek stricter immigration rules in Germany, particularly for Muslims.

The movement's influence spread outside Germany in late February, with protests held in Austria's Vienna and the United Kingdom's Newcastle.