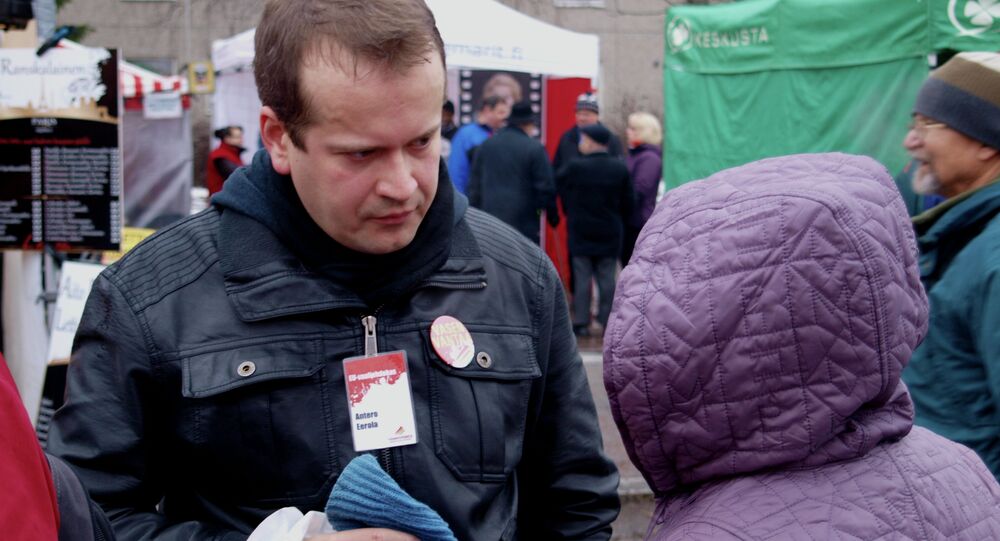 Finnish reporter and politician Antero Eerola got his lip torn in a brawl after he witnessed Kiev troops violate ceasefire just after 12 hours after signing the agreement.

During his trip to Ukraine in February, Eerola witnessed that the Ukrainian Forces positioned at Svitlodarsk, a government-controlled town, shelled Donbas self-defense troops despite the recently signed ceasefire agreement.

“There, the government forces fired cannon fire on the rebel positions just 12 hours after the start of the ceasefire”, Eerola said.

Later in the evening, Eerola and his photographer moved to the frontline from another direction and were just 10 miles away from Horlivka, controlled by independence supporters.

© Sputnik / Alexandr Maksimenko
Kiev Court Releases Suspect in Attack on LifeNews Journalist
After returning to Kiev-controlled Slaviansk, the two went to a local restaurant. Suddenly, a group of young men speaking Ukrainian in an aggressive tone, approached the reporters. Eerola answered he did not understand Ukrainian and spoke only Russian. The presence of foreign journalists in the area was undesired, Eerola concluded from what he could understand from the men’s words.

One of the men hit the journalist in the face tearing his lower lip.

The reporter said the freedom of speech was deteriorating in Ukraine. Moreover, he said Finland did not provide the complete picture of the Ukrainian conflict. The press and politicians have instilled the idea that external interference was the source of the crisis, which was not objective.

“It is easy to cast the blame for everything on Russia”, Eerola said.

Maidan activists are deeply disappointed with the results of the regime change in the country, Eerola said.

“I have never seen such a circus in the courtroom: complete chaos, name calling and threats,” Eerola commented on two right-wing parties’ attempt to get the Ukrainian Communist Party prohibited.

The circus yesterday in Kiev. The authorities are trying to ban Communist Party. #rule #Democracy