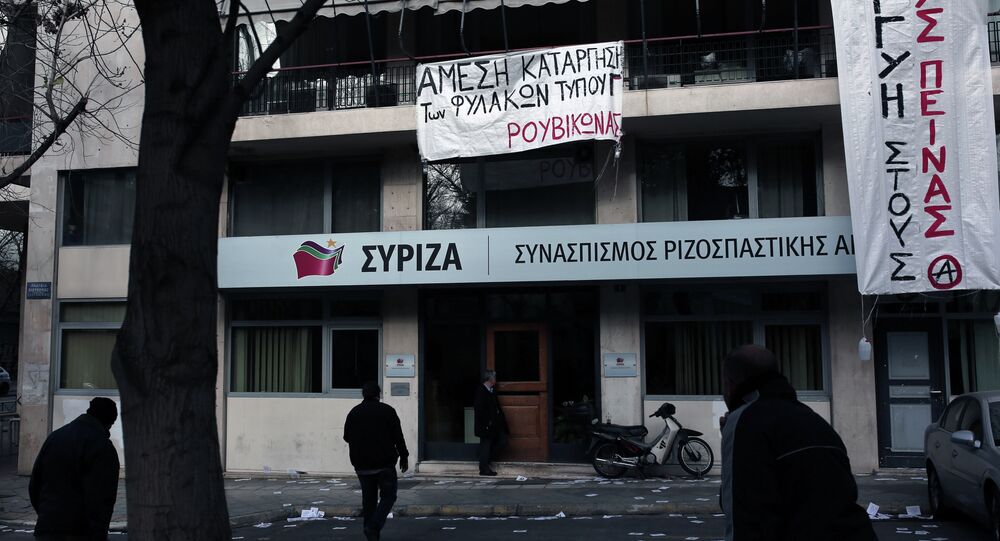 The Greek anarchist group Rubicon said it took over the Syriza party's office in Athens to support several dozens of Greek inmates, including those charged with terrorism, who began a hunger strike earlier on Sunday.

© REUTERS / Alkis Konstantinidis
Syriza Cites Greece’s Struggle for Economic Growth as Example for EU
ATHENS (Sputnik) — Members of a Greek anarchist movement seized the central office of the left-wing Syriza party in Athens, demanding to close maximum security prisons and free those detained in connection with the case of Conspiracy of the Fire Nuclei radical group.

The Conspiracy of Fire Nuclei took part in several terrorist attacks, including attempting to send parcel bombs to a number of embassies in Athens in 2010.

According to local media, some 60 people took part in the seizure of Syriza headquarters. Currently, the spokesperson for Syriza and the party’s secretary remain inside the building having locked themselves up in their offices.

© AP Photo / Lefteris Pitarakis
Syriza Victory in Greece Signals of European Union Decline
"We will not be mere spectators in the struggle for the liquidation of laws that terrorize us,” Rubicon said in a statement published on the website of Greek anarchists’ organizations.

The activists demand freeing the relatives of the Conspiracy of Fire Nuclei members, who were arrested earlier in March on suspicion of aiding terrorist activities and another radical left activist, who was injured during a failed bombing attempt in 2002.

The group also demands the government to reduce the length of maximum prison term from life sentence to 12 years and the length of pre-trial detention to a maximum of 12 months, as well as to allow prisoners use Internet.

Syriza, or The Coalition of the Radical Left, won the majority in the Greek parliament during the election in January.