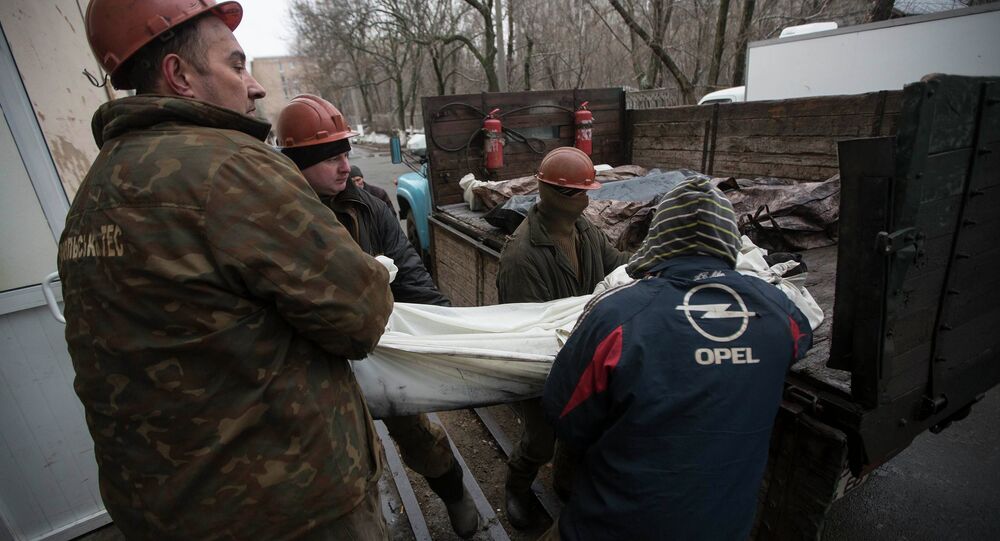 Donetsk People's Republic (DPR) Emergencies Minister Alexey Kostrubitsky confirmed the death of 33 miners, who were killed by blast in the Zasyadko Mine.

© REUTERS / Baz Ratner
DPR Officials Launch Criminal Investigation Into Zasyadko Mine Accident
DONETSK (Sputnik) — The rescue operation at a coal mine in the Donetsk Region in eastern Ukraine has been complete as 33 bodies of miners, who were killed in the blast on Wednesday, have been brought to surface, the Emergencies Ministry of the self-proclaimed Donetsk People's Republic (DPR) said Thursday.

"The rescue works were complete at 07.00 p.m. [16:00 GMT] local time. Bodies of 33 miners have been found [during the rescue operation]. They have all been brought to surface," DPR Emergencies Minister Alexey Kostrubitsky said.

The explosion, apparently caused by high concentration of methane gas, occurred in the Zasyadko mine, one of Ukraine's largest, on Wednesday morning.

© AFP 2021 / JOHN MACDOUGALL
Death Toll in Donetsk Mine Rises to 24, Fate of 9 Unknown - DPR Officials
According to the DPR authorities, some 230 workers were underground when the blast took place.

Earlier on Thursday, DPR authorities said that they issued an order to shut down the coal mine in February, but the management of the mine kept it running despite the ban. DPR also stated that the Zasyadko mine had been recognized as Ukraine’s most dangerous.

Since Ukraine gained independence in 1991, the blast-hit mine has seen at least eight grave accidents, which left dozens killed. The worst explosion occurred in November 2007, killing 101 workers.

Mine Explosion in East Ukraine: Fate of 73 Miners Unknown