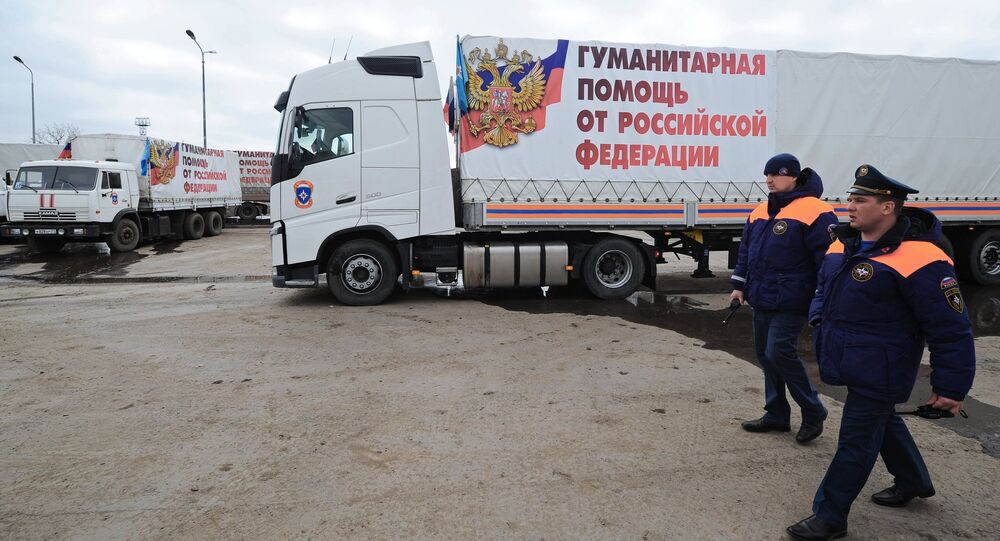 The next humanitarian convoy of the Russian Emergencies Ministry for Donbas was formed in the Rostov Region and it is ready to depart, according to a ministry spokesman.

"The next humanitarian convoy of the Russian Emergencies Ministry for Donbas has been formed in the Rostov Region. It is ready to depart. It consists of over 160 vehicles loaded with a total of over 1,800 tons of humanitarian cargo," Alexander Drobyshevsky told RIA Novosti.

Foodstuffs comprise about 90 percent of the cargo, the rest is essentials for everyday life, according to the spokesman.

© Sputnik / Sergey Pivovarov
Dispute Brewing in Kiev Over Russian Humanitarian Aid Convoy to Donbas
The convoy will depart for the Donbas region on Wednesday, March 4.

Russia has sent over 20,000 tons of humanitarian aid including food, water, clothes, medicines, power generators and construction materials to eastern Ukraine since August 2014.

Donbas has been suffering a severe humanitarian crisis since the beginning of a Kiev military operation against pro-independence fighters in the region April 2014.

Russia to Send Next Humanitarian Aid Convoy to Donbas on Tuesday