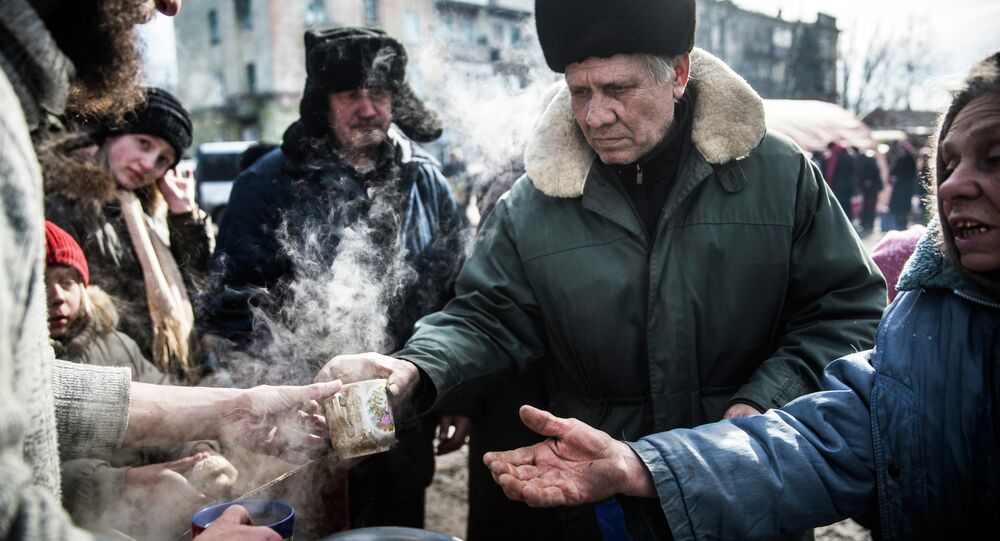 A community activist from Dresden has hauled hundreds of kilograms of donated goods to desperate residents of war-torn Donetsk.

© Sputnik / Sergey Pivovarov
Russia’s 16th Humanitarian Convoy Delivers Aid to Donetsk, Luhansk
Lothar Geubert, a community activist from the eastern German city of Dresden, has collected and transported over 800 kilograms worth of humanitarian assistance to the residents of war-hit Donbas.

"I have brought medicines, food, clothing and children's goods," Geubert noted, as cited by Donetsk News Agency. "In Germany there are many people that want to help the people of Novorossiya," the activist added.

The humanitarian added that some of the assistance has already been gratefully accepted by patients and workers at the Donetsk Republican Cancer Center, with 100 bags of goods now on route to be distributed to the residents of war-hit Debaltsevo, and to the refugees from Debaltsevo and Uglegorsk who are now living in hostels and dorms in the city of Donetsk.

© AFP 2021 / BRENDAN SMIALOWSKI
Lethal Aid to Ukraine to ‘Bolster Their Morale’ - US Official
Geubert is reported to have transported the humanitarian assistance to eastern Ukraine via Russia, considering it unsafe to do so via Ukraine, which has blockaded routes to the eastern breakaway regions of Donetsk and Lugansk.

Communities throughout the separatist regions have seen their civilian infrastructure heavily damaged following fighting between the Ukrainian military and local militia. The Ukrainian armed forces have been accused of shelling heavily populated areas of cities with artillery fire.