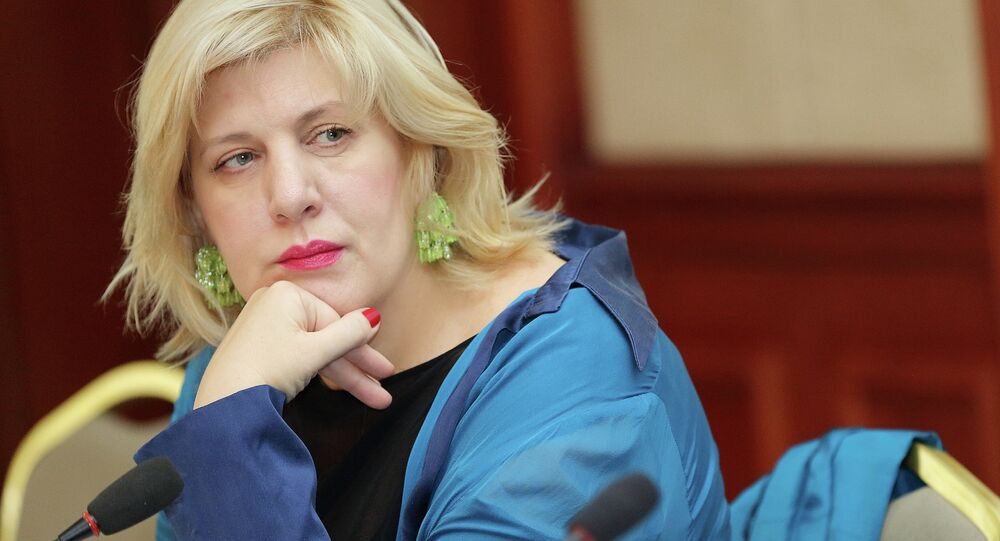 The OSCE Representative on Freedom of the Media is ready to discuss the press freedom in Ukraine with the Russian foreign minister.

© AFP 2020 / FABRICE COFFRINI
Lavrov Calls on Kerry to Influence on Kiev Over Minsk Deal Commitments
MOSCOW (Sputnik) — Organization for Security and Co-operation in Europe (OSCE) Representative on Freedom of the Media Dunja Mijatovic said on Monday she was surprised by Russian Foreign Minister Sergei Lavrov's doubts about the organization's impartiality.

Earlier on Monday, Lavrov expressed his concern whether the OSCE was unbiased. He said that Dunja Mijatovic's description of restrictions imposed by Kiev on Russian journalists was insufficient to represent the entire problem.

"I must say I find it quite surprising that Minister Lavrov decides to comment on a statement made by the OSCE Representative on Freedom of the Media at the regular session of the UN Human Rights Council, not least since my office was the only international organization that raised the issue of the recent restrictions imposed on Russian journalists in Ukraine. I wonder on which parameters that could be considered as biased," Mijatovic said in an email to RIA Novosti.

© Sputnik / Natalia Seliverstova
Moscow to Raise Issue of Ukraine Blacklist of Russian Media
"However, it is important that Minister Lavrov is following the work of my Office and I would be happy to meet with him soon to discuss this, or any of my other statements on free media in Russia or elsewhere in the OSCE region", she said.

On February 12, the Ukrainian parliament made a decision to strip Russian news outlets of accreditation in Ukraine's government agencies. A list of media outlets that fell under the ban was not provided.

The freedom of the media in Ukraine has been repeatedly violated since the military confrontation between Kiev forces and Donbas independence supporters started in April 2014. Several international journalists have been abducted, tortured and killed during the hostilities.