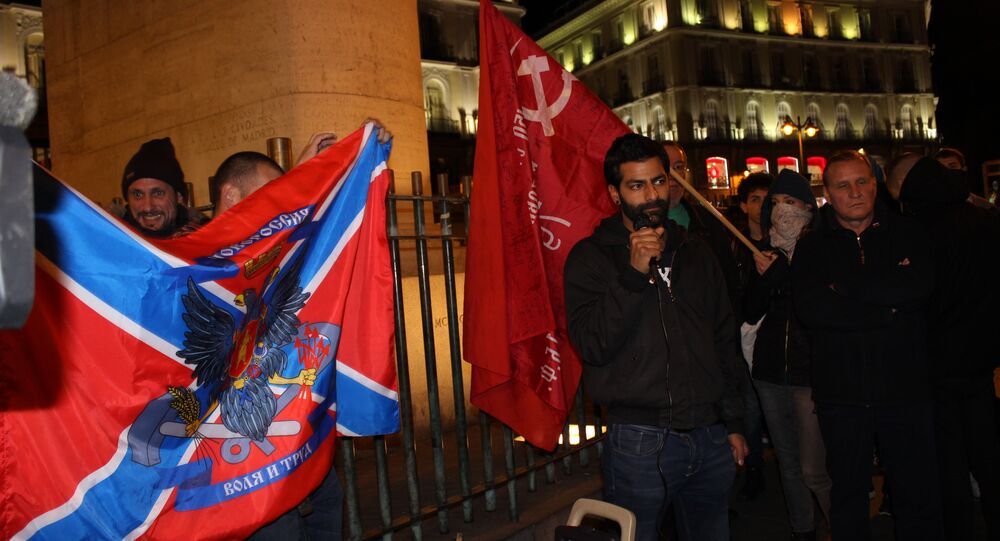 Spain Will Not Persecute Nationals Who Fight for Ukrainian Army - Volunteer

Spaniards detained last week on suspicion of involvement in the Ukrianian military conflict say the government does not persecute Spanish nationals who fought for the Ukrainian army.

Supporters gathered at a rally for the eight Spaniards who were detained Friday for taking part in the military conflict in Donbas in central Madrid on Sunday evening.

The eight, who are suspected of "violating neutral stance of the Spanish state," told RIA Novosti that the accusations were baseless.

They added that the Spanish authorities persecuted only the supporters of communist and antifascist movements while Spaniards who fought for the Ukrainian armed forces escaped punishment.

© Sputnik / Andrey Stenin
Spain's Neutrality Over Ukrainian Conflict Questioned
Hector Arroyo and Sergio were held by Spanish police for over 15 hours. They were told that they were suspected of abetting murder, possessing a weapon and violating the interests of the Spanish state. The Interior Ministry said they had "undermined national peace and independency" and violated Spain’s neutral stance toward the military conflict in eastern Ukraine. A total of eight Spaniards were arrested in six Spain provinces. The detainees were released and are expected to appear in court.

"I think that our detainment was aimed at keeping other Spaniards away from Ukraine," Hector Arroyo told RIA Novosti.

According to him, "there are still some Spanish nationals" in the conflict zone. He also told about Spaniards who fought for the Ukraine army. Unlike him, they are mercenaries and receive money for their job.

He explained reasons behind his decision to go to Donbas: "I saw people were killed and burned. I could not tolerate such atrocities against civilians."
He also told about Spaniards who fought for the Ukrainian armed forces.

© AP Photo / Evgeniy Maloletka
Guns for Hire? Donetsk Intercepts Enemy Conversations in Four Different Languages
"There are Spaniards in the Azov battalion. I don’t know whether they are mercenaries or volunteers," he said.

Ramiro Gomez, one of the leaders of the Madrid Committee in Support of Anti-Fascist Ukraine, also said that Spanish nationals fought in the Ukrainian army. He said he travelled to Luhansk on "a humanitarian mission".

He criticized Spanish authorities for planning to adopt a bill on volunteers who come abroad. In September Spanish Foreign Minister Jose Manuel Garcia-Margallo said that authorities prepared a bill which would designate any participants in military operations abroad Spain as terrorists. However, the bill has not become law yet.

"If we carefully read the bill, it becomes clear that raising money and supplying of medications are also designated as support of terrorism," Ramiro said.

Augustin Rios, a representative of the Committee in Support of Anti-Fascist Ukraine, believes that Spanish leftists owe to the countries which supported Republicans during the Spanish Civil War in 1936-1939.

© REUTERS / Baz Ratner
Some 200 Volunteers Join Donbas Forces Every Day - Donetsk Leader
In Donbas militia there a lot of foreigners from countries across the world, according to Sergio. They come from Serbia, the US, Germany, South America countries and ex-Soviet republics.

"I came right after the first Minsk agreements were reached. Before I got to Donetsk, I saw checkpoints were shelled, and one building was completely destroyed," he remembered.

Donbas residents should be given the right to determine their future on their own, Sergio believes.

"They should leave these people alone. They should let Donbas residents decide how they want to live," he said.