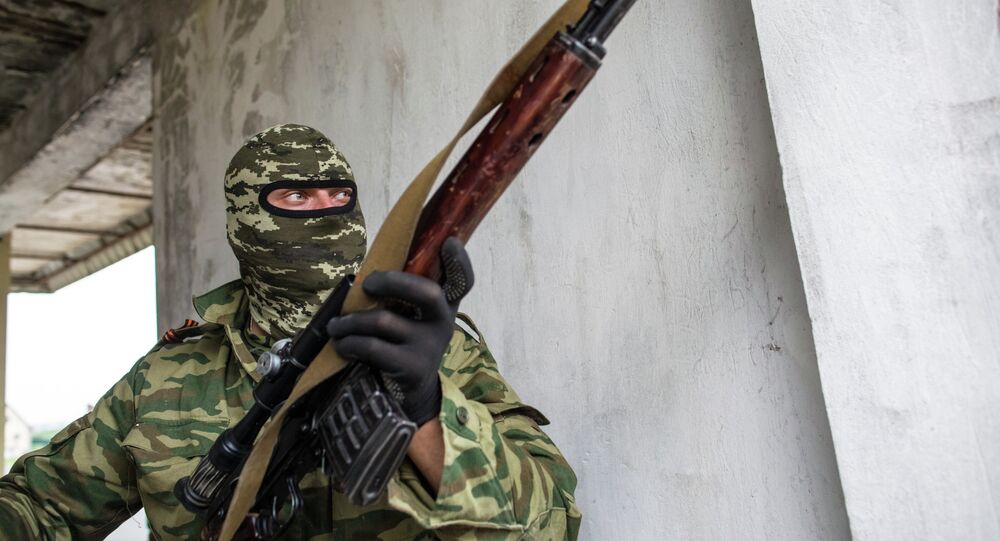 Hector Arroyo, one of the eight Spaniards arrested Friday morning on suspicion of involvement in the military conflict in eastern Ukraine, said Spain does not have a neutral stance in the Ukrainian conflict.

© Sputnik / Dan Levy
‘There Are No Independent States in EU, They Are All Vassals of the US’
The government of Spain does not maintain neutrality in the ongoing conflict in Ukraine and supplies military equipment to Kiev, one of the eight Spaniards arrested Friday on suspicion of involvement in the military conflict in eastern Ukraine told Sputnik Mundo in an interview.

Following the arrest, the Spanish government said that by taking part in the Ukrainian conflict, the detainees undermined peace efforts and violated Spain’s neutral stance toward the conflict.

However, Hector Arroyo, one of the eight Spaniards arrested on Friday, said that the Spanish government lies about its neutrality in the Ukrainian conflict.

© AP Photo / Sergei Grits
Arrested Spaniards Fought for Free Donbas - Anti-Fascist Committee
“There is no neutrality on the part of Spain in this conflict, so we could not have undermined it to begin with. Spain has supplied military equipment to Kiev and supports the current government. We know that there are Spanish mercenaries in the ranks of the Ukrainian army,” Arroyo told Sputnik Mundo.

Arroyo also said that the government of Spain does not have evidence to lay charges against them and added that their group was on a humanitarian mission in Donbas anyways.

“[We] helped to unload trucks with food, handed out food and clothing to people who lost their homes,” the Spaniard said.

What do you think is the most important event of the week?
Voted: 971
All polls
Arroyo and his friends spent three months in Luhansk helping the residents of the war-torn city. He wonders why they were arrested, since they were not even fighting, meanwhile other Spanish nationals, who fought on the side of the Kiev forces were not detained.

He believes that police have no evidence that could justify charges against those Spaniards, who were arrested Friday on suspicion of fighting in Donbas.

"We are accused of committing crimes of possessing and storing arms and explosives, and participating in commission of murder, but they have no evidence to prove it, so we are free. If they had proof, we would be in jail," Arroyo told Sputnik Mundo after he and his friends were set free.

Although free for now, Spaniards, who was arrested on Friday, are expected to appear in court. If found guilty, the defendants may face prison terms, ranging from four to 15 years.