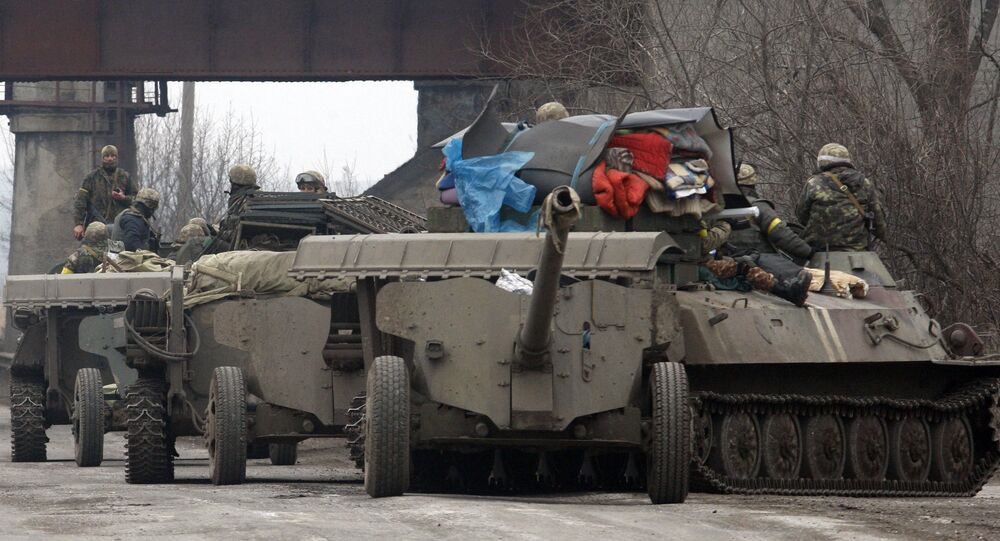 Kiev forces are moving back from the line of contact in Donbas, but they are ready to return if the ceasefire is violated.

© REUTERS / Baz Ratner
DPR Calls on OSCE to Inform Kiev of Heavy Artillery Withdrawal
KIEV (Sputnik) — The Ukrainian forces have begun withdrawing artillery from the front line in the country's eastern regions, but they are ready to return it to its initial positions at any moment, Ukrainian President Petro Poroshenko said Friday.

“Yesterday, in implementation of the Minsk agreements, we began the withdrawal of some heavy weaponry from the separation line in Donbas… This is the very beginning of the Minsk plan implementation that was reached during difficult talks in Minsk and which is so far being violated by the enemy. That’s why, at any time and moment, our troops are ready to return the equipment to the previous lines and to retaliate in the shortest possible terms," Poroshenko said.

The president added that even with "the most positive scenario" of a longterm truce and political settlement, a military threat from the east "will remain current and require continuous efforts to strengthen the country's defense capability."

An armed conflict broke out in Ukraine's southeast last April, after Kiev launched a military operation against the region's pro-independence movement.

What do you think is the most important event of the week?
Voted: 971
All polls
A ceasefire deal was signed between Kiev and eastern Ukrainian militia in September, during talks in Minsk, Belarus.

The deal failed to put an end to the fighting, however, a new truce agreement was signed in mid-February, again in Minsk, after weeks of intensified clashes and heavy civilian losses.

According to the Minsk agreements, the sides are to withdraw their heavy weaponry from the line of contact. On Thursday, Poroshenko gave an order to begin the pullback, while militia in Ukraine's eastern breakaway region of Donetsk said the same day it already had withdrawn 90 percent of its artillery.

Kiev to Leave Military Forces Along Line of Contact in Donbas

Donetsk to Hold Back on Withdrawal Sites – DPR Leader