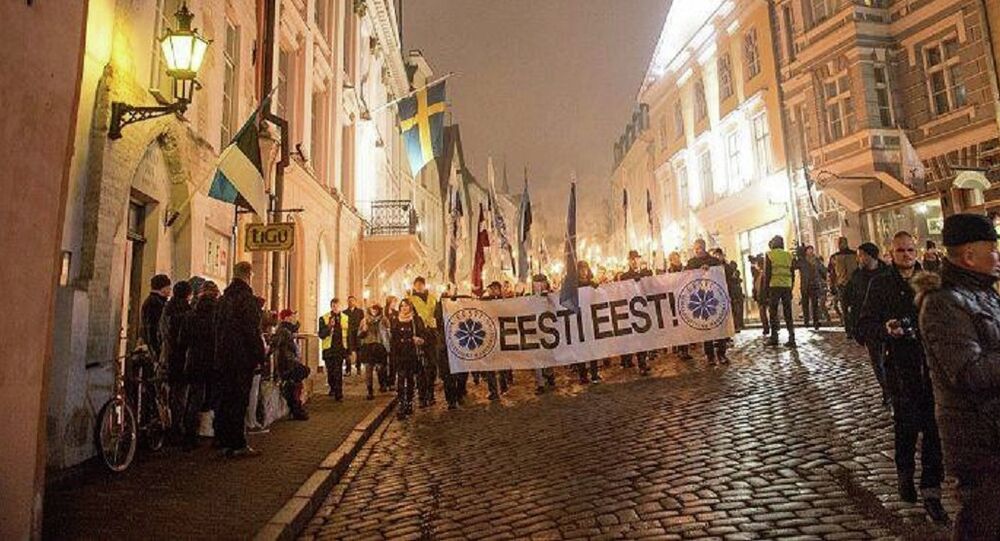 A torch-lit march held by the youth wing of the Conservative People's Party of Estonia was attended by a Swedish white nationalist organization, despite organizers' claims that the event had 'no connection fascist radicalism'.

Jaak Madison, head of the youth wing of the Conservative People's Party of Estonia, which organized the march, confirmed that members of the group "participated in the torch-lit march, along with guests from other parties in Latvia and Lithuania."

Nordisk Ungdom, an extreme nationalist group which formed in Sweden in 2010, is considered by Swedish police and anti-fascist activists to be a "fascist and right-wing activist organization."

© REUTERS / Ina Fassbender
PEGIDA Protest Spread to Britain
Members of the group are known to have traveled to Ukraine in in March, 2014 to support the ultranationalist Svoboda party, ostensibly for the purpose of "saving the white race," Swedish newspaper Nyheter Idag had earlier reported.

Madison defended the group's participation in the march, which had gathered about 200 people Tuesday night for a march through the old city of Tallinn, including past the Russian embassy. He noted that the term "radical" is used in an "arbitrary and uncontrolled way."

The CPPE had invited "all patriots seeking to express their respect toward Estonia" to the event. Slogans featured in the march included "For Estonia!" and "Estonia for Estonians!" Following the march, participants sang songs and gave speeches. Estonian and Russian media reported that the event took place without any provocations.

© RT
Ukrainian Nationalists March in Torch-Lit Rally Through Central Kiev
Organizers of the event denied any association between torch-lit marches and right-wing extremism. Madison noted that torchlight "is very beautiful," and symbolizes "a desire for freedom, to overcome the darkness." He noted that "participation in such a procession makes you stronger; you begin to love Estonia even more. There is no connection to Nazi Germany." Another organizer, interviewed by LifeNews, noted that the "event is analogous to the processions taking place in Latvia on November 18 on their Independence Day," and that "any associations with Nazi Germany are out of place."

On January 1, a torch-lit procession took place in Kiev and in regions across western Ukraine to commemorate the birthday of Stepan Bandera, a Ukrainian fascist and militant who collaborated with Nazi Germany, and later convicted of terrorism by Poland.

Human Rights Group Secretary Andrei Sarenkov of movement "Estonia Without Nazism" told LifeNews that "as cultured people, we understand where this sort of thing starts and what it could lead to. Today these guys hold a torch, but tomorrow they may take up weapons. And we know, most importantly, how all this ends, and it ends badly, in Germany and in Ukraine."

Earlier on Tuesday, Estonian and NATO armed forces held a parade in the border city of Narva, just 300 meters from the Russian border.