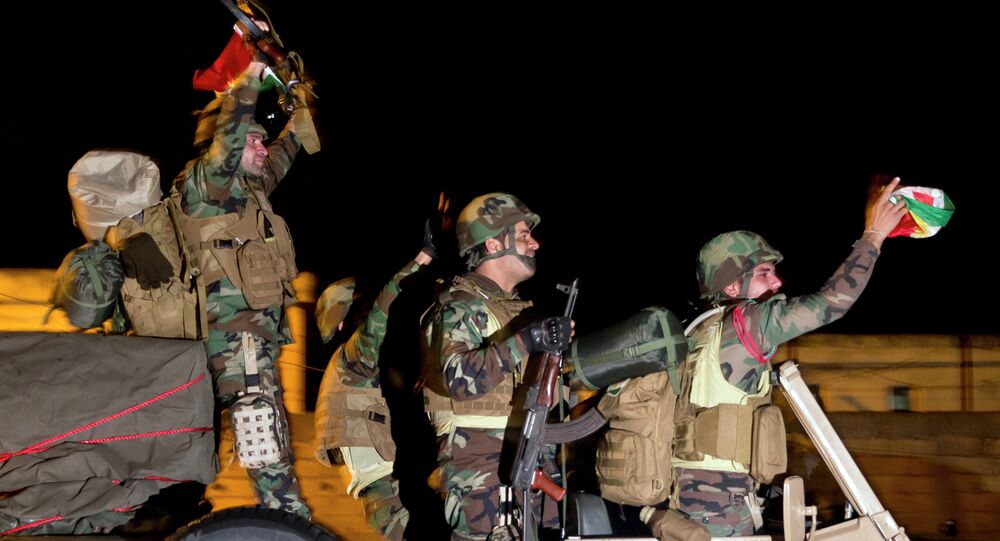 UK Ministry of Defence refuses to confirm whether a British soldier will face disciplinary proceedings after allegedly travelling to join Peshmerga.

EDINBURGH (Sputnik), Mark Hirst – The UK Ministry of Defence (MoD) has refused to confirm whether a British soldier will face military disciplinary proceedings after allegedly travelling to join Kurdish Peshmerga forces who are presently battling Islamic State (ISIL) in Syria and northern Iraq.

“We’re not going into any of that,” MoD spokeswoman Angela King told Sputnik when asked what sanctions the unnamed soldier faced on return to his unit, the 2nd Battalion The Princess of Wales’s Royal Regiment (PWRR).

King added the ministry confirmed that the soldier was with members of his regiment and returning to his unit.

The soldier reportedly told family members by mobile text message that he planned to spend a year in the region, although was technically on official annual leave at the time he was located in Syria and returned to his unit.

Sky News, who broke the story, reported that an unnamed army source had told them the soldier was unlikely to face disciplinary proceedings because technically he was not Absent Without Leave (AWOL).

King responded negatively when asked by Sputnik whether it was normal for members of the British armed forces to be granted a year’s annual leave, the period the soldier reportedly told family he planned to stay in Syria.

© REUTERS / Ahmed Jadallah
Kobani 90 Percent Free From IS Militants, Peshmerga Forces Report
“I know no job in which you are given a year’s annual leave entitlement and the [military] services are pretty standard with their leave,” King said.

When asked if this incident was an isolated case King refused to comment.

But another Army source who spoke to Sputnik on condition of anonymity said it was unlikely to be a one-off case.

“He won't be the first squaddie to do something like this,” the source told Sputnik.

The source said the case was about contravening Army Standing Orders.

“They'll do him for contravening Part Ones [Army Standing Orders] as he’s travelled to a restricted country without authorization or security clearance,” the source added.

Although British soldiers on annual leave are generally free to travel to any country, the MoD has special regulations in place known as Defence Movements and Transportation Regulations that prohibit travel to “countries to which special security regulations apply.”

The 2nd Battalion PWRR, the infantry unit with whom the 19-year-old soldier was serving is based in Dhekelia, Cyprus and is currently designated as the UK’s “Regional Standby Battalion” and is designed to respond to very rapid deployments in the Middle East and North Africa.

A detachment of troops from the soldier’s unit are in northern Iraq training Peshmerga battalions, but it is not believed that they came into contact with the absent serviceman.