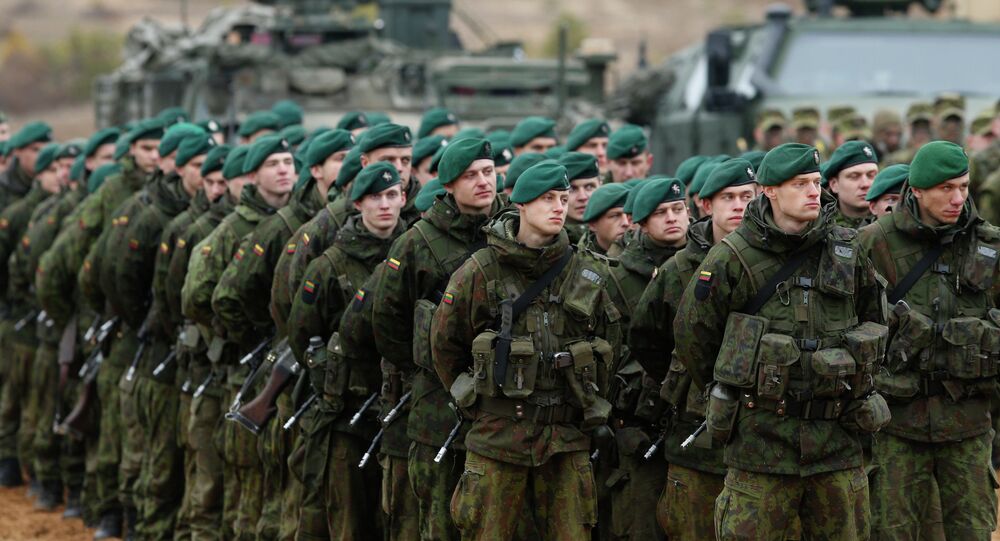 Back to Conscription? Lithuania Buffs Army as Paranoia Campaign Intensifies

Lithuania's president announced that the country will return to a conscription-based military, as its government and media whip up a campaign of paranoia against Russia.

The initiative still needs to clear parliament. If it does, the first draft will take place in September 2015, according to a local news portal Delfi.
Mandatory military conscription was scrapped in Lithuania in 2008 when the country decided to build a professional army.

Lithuania has been stricken with paranoia in recent months, with the country's government raising alarm that Russia is allegedly planning on invading the country, and that Russian security services are allegedly training separatists in the country. Between February 17 and 21, a Lithuanian motorized infantry brigade conducted exercises on "reacting to threats of hybrid warfare" by fighting "separatists."

YouTube.com/UKRAINE TODAY
Lithuania Marks Goods With Colorado Bug to Thwart ‘Kremlin Propaganda’
The same attitude of paranoia has been paralleled in the country's media. The Lithuanian news website Delfi has published a series of articles about Russia's alleged threat to the country, interviewing professors at Vilnius University.

"Right now the threat at our borders has become real. It is obvious that the psychological consciousness of a threat in our society has returned. We began a peculiar stage which concluded with an important political step. In general, this restores a sense of security, the realization that threats and risks are being managed on a political level," Professor Nerijus Maliukevicus of the Institute of International Relations and Political Science at Vlinius University announced to the publication, commenting on the coming return of conscription. "If your neighbor are acting aggressively, the only chance is to provide effective deterrence, through action, not words."

The attitude of paranoia is even being instilled at an ideological level, which by far exceeds the scope of recent history, or even that of the 20th century.

© REUTERS / Maksim Levin
Lithuanian NGO Begins Training Ukrainian 'Military Advisors'
"The current conflict has been programmed in. Russia is showing what it has fought for in the past 300 years – power, land. It all began during the Congress of Vienna [in 1814] when the heads of Europe came together to discuss the political and economic situation in Europe after the Napoleonic Wars," Lithuanian historian Vytautas Jokubauskas announced at the Vilnius Book Fair on Tuesday. "And although it appears that we must take away the lessons of nuclear weapons tests and the Holocaust, Russia wants to return to the 17th century, to the Romanov dynasty, return the territories that it once had. Right now Europe is winning and Russia is feeling it."

Building on this argument, Jokubauskas states that Lithuania "must suppress the spreading of the enemy" through its alliance with the United States over the European Union, as European countries "avoid provoking even greater aggression" because of Russia's nuclear arsenal.

© AFP 2021 / PETRAS MALUKAS
Ukraine Signs Agreement to Create Military Brigade With Poland, Lithuania
It is unclear what effect the Lithuanian government, media and academia's campaign of paranoia has on ordinary Lithuanians. A poll released on Tuesday stated that in case of war, 59 percent of Lithuanians are prepared to defend their country, compared to 32 percent in 2005.

However, Lithuanians are less united in their feelings toward Russia. Although around half of those polled replied that they view Crimea's reunification with Russia negatively, most Lithuanians do not think they are better off than people in Russia, and believe that that Lithuania's economic state has worsened between 2006 and 2014.

Lithuanian Economy to Grow Slower than Expected in 2015: Prime Minister