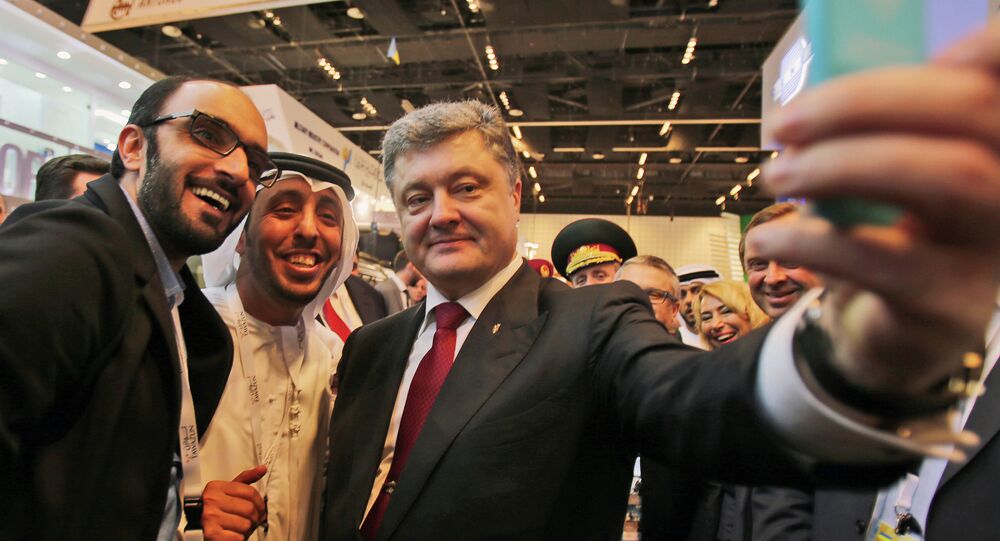 During his visit to Abu Dhabi, UAE on Tuesday, Ukrainian President Petro Poroshenko announced that he had signed a weapons deal with the Persian Gulf nation, without providing any more details.

Ukrainian President Petro Poroshenko announced the signing of a deal on military and technical cooperation with the United Arab Emirates on Tuesday, during his visit to the IDEX-2015 Arms Expo in Abu Dhabi.

The president told reporters that he had signed a "very important memorandum about military and technical cooperation" with his UAE counterparts, without providing any more information on what the agreement will entail. The deal was struck between Ukrainian officials and UAE Crown Prince and Armed Forces Deputy Supreme Commander Sheikh Mohammed bin Zayed al-Nahyan.

Further details on the deal have not been confirmed by Ukrainian or Emirati officials.

Following his negotiations, Poroshenko began a tour of the IDEX-2015 arms expo.

"Unfortunately, the level of security in the world has been reduced today; therefore the popularity of IDEX is growing."

Commenting on the signing of the agreement via Facebook, advisor to Ukrainian Interior Minister Anton Gerashchenko noted that while "the types and numbers" of weaponry "cannot be discussed on Facebook," it is "worth emphasizing that unlike Europeans and Americans, the Arabs aren’t afraid of Putin’s threats that a third world war may start if weapons and military equipment are provided to Ukraine." Noting that the UAE has blamed Russia for the fall in oil prices, Gerashchenko adds that this deal "is going to be their little revenge."

Discussing the agreement, Dubai-based geopolitical analyst Dr. Theodore Karasik told Radio Sputnik that while "it's not really clear yet what the contours of this security agreement are...there is one issue that the Emiratis are very interested in, and that of course has to [do] with Syria. I think that they see Russia as cozying up too much to President Assad, [with a view] that this has gone on long enough. Trying to strike a balance in terms of relations is very, very typical for UAE foreign and security policy and I think that's what we're seeing right now."

On Monday, Russian President Vladimir Putin gave an interview to political talk show host Vladimir Solovyev, noting that it disconcerts him that Ukrainian political figures "are trying to take a standoff between Ukraine and Russia to a higher level," by various means, including attempts "to justify their defeats [in eastern Ukraine] and blaming Russia for it." The president noted that "no one needs a conflict on the edge of Europe, especially an armed one." As for the threat of general European war, Putin noted that "I think that such an apocalyptic scenario is highly unlikely."