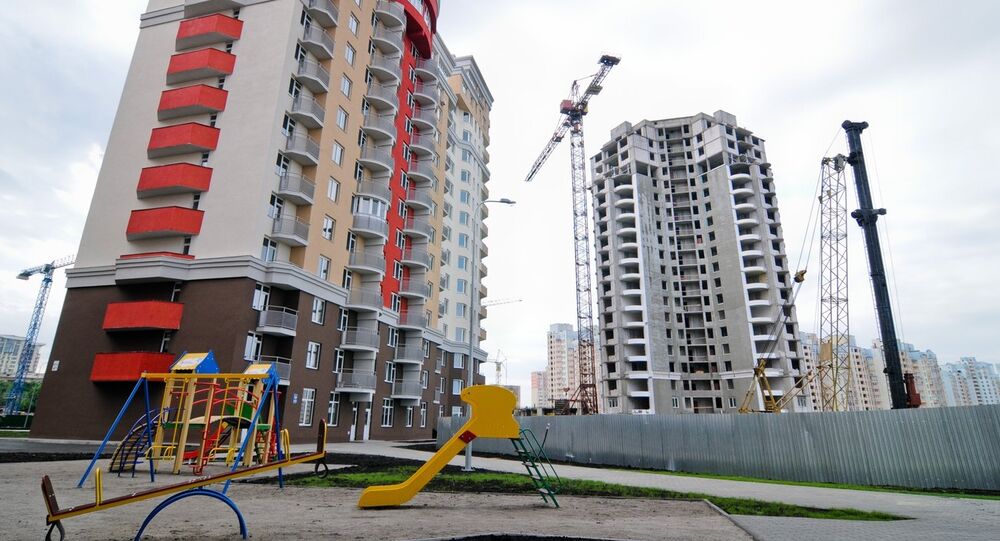 While eastern Ukraine has been engulfed by civil war, the west of the country has witnessed a housing boom unseen in decades in 2014, as wealthy residents from Kiev and the east look for a safe haven away from war and instability.

© REUTERS / Maxim Shemetov
EU Policy in Ukraine Could Result in Mass Exodus to Europe
While the eastern Ukrainian regions of Donetsk and Luhansk have been engulfed in a civil war and facing economic and social paralysis over the past nine months, some regions of Western Ukraine have witnessed their largest building boom in over 20 years.

With overall urban housing construction across the country falling by 2.1 percent in 2014 to 9,731,000 meters, a statistical report recently by Ukraine's State Statistics Service has found that the country's western-most provinces saw construction rise by their highest levels in over 20 years. Ivano-Frankivsk saw a 44.1 percent increase, Lviv 41.4 percent, Odessa 39.8 percent, Khmelnytskiy 21 percent, and Kiev 14 percent. Meanwhile, even excluding the war-torn regions of Donetsk and Luhansk (which have suffered a decline of 45.9 and 30.9 percent, respectively), many heavily populated eastern regions saw construction dive by double digits, Zaporizhzhya down 37.7 percent, Dnepropetrovsk 33 percent, Kherson 36.6 percent, and Kharkiv 28.2 percent. The complete 2014 housing construction statistics can be found here.

As Rosbalt points out, the 250,000 person region of Ivano-Frankivsk alone saw more building than the regions of Dnepropetrovsk, Kharkiv and Zaporizhzhya combined, the latter being home to more than eight million people.

© Sputnik / Sergey Pivovarov
Some 1.3 Million Ukrainian Draftees Reside in Russia - Russian Official
Rosbalt journalist Viktor Yaduha noted in his recent investigation into the collapse of housing construction in eastern Ukraine that most of the new demand for housing in the west of the country comes from wealthy Kiev residents looking for the safety of a second home, along with affluent eastern Ukrainians, who do not share their compatriots' pro-Russian views. Yaduha rules out the idea that the increased demand may come from locals, noting high rates of poverty have not dissipated, but rather intensified, over the past year. As for refugees coming from the east, most are desperate, their homes and belongings left behind in the east, and they themselves are concentrated in hostels, dorms and sanatoria in the Kiev area.

While wealthy Kiev residents and easterners swept away by feelings of nationalism have been buying up housing in western Ukraine, the wealthiest have been leaving for Europe, North America and Israel, while the poorest, among them hundreds of thousands of young men, have escaped to Russia.

© Flickr / Kai Hendry
Poland Faces Huge Influx of Ukrainians Seeking Work, Residency, Refugee Status
Tens of thousands have fled to Europe, with Poland, Germany and Sweden among the most popular destinations. Over 4,000 have recently applied for asylum in these three countries alone. But Yaduha notes that "despite the Euro-integrationist pathos of the new Ukrainian government, leaving for the West has turned out to be very difficult. Social networks are filled with adverts from lawyers, who promise to provide clients with a chance for refugee status in the EU for $5-10,000, but make no guarantees." Moreover, "the stories of the lucky ones, who managed to get into a refugee camp in Germany, describe their living conditions as something resembling a barracks. And ultimately, many are sent back to their homeland after three months anyway."

The war in eastern Ukraine and the threat of conscription, along with political tensions, and economic collapse, have resulted in the displacement of several million people across Ukraine. A UN report from last month estimated 633,000 to be internally displaced, as 1.4 million more people in the conflict zone remain vulnerable to hunger, cold, and lack of medicine. The UNHCR has reported that 830,000 refugees have left for Russia since last April, while Russian Security Council Secretary Nikolai Patrushev recently noted that about 2.5 million Ukrainians, including 1.3 million draft-eligible men, are presently living in Russia.

The civil conflict in eastern Ukraine is estimated to have cost the lives of over 6,500 people, with German intelligence recently estimating a much higher number of casualties – up to 50,000, since April 2014.