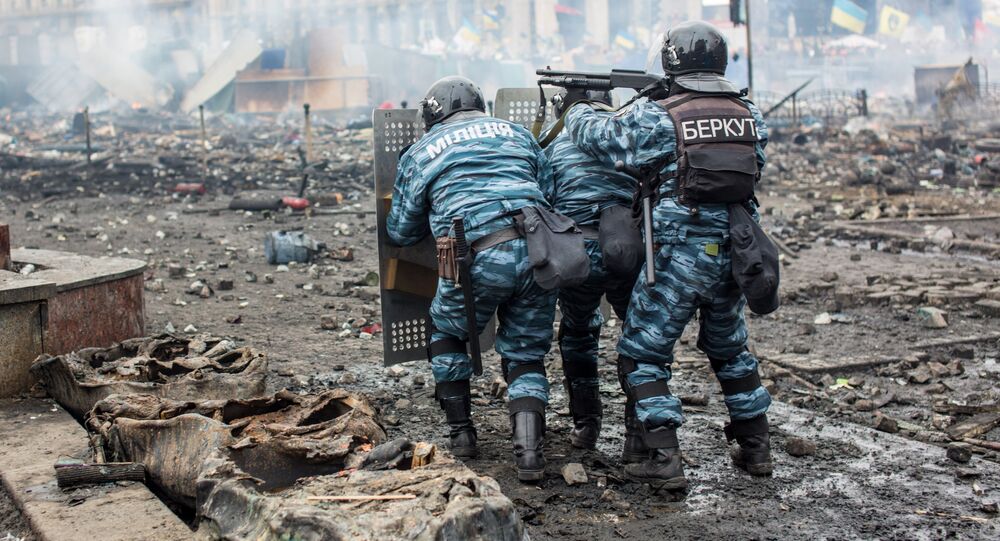 Exactly one year has passed since the public disturbances at Kiev’s 'Maidan' escalated into street fighting — ultimately leading to a coup d’état in Ukraine. Members of the Ukrainian 'Berkut' special police force were involved in these events from the beginning. The new Ukrainian authorities now label them as traitors, and blame them for the numerous deaths and injuries that occurred during the riots.

Alexander Popov and Sergei Khayrulskiy are two former Berkut operatives who moved to Russia and enlisted at the Moscow Special Purposes Center of Russia’s Ministry of the Interior. They firmly believe that they were doing the right thing back then on the streets of Kiev. "We have nothing to be ashamed of, we did not betray Ukraine. We were doing our duty until the end; we were the ones betrayed by Ukraine," they say.

© Sputnik / Andrei Stenin
One Year Since Beginning of Euromaidan Protests in Ukraine
Why did you decide to move to Russia?

Alexander Popov: Because we’re considered criminals now in Ukraine, even though we were simply doing our duty. Not once did we exceed our authority while we were trying to keep the public order, and yet the Ukrainian authorities have initiated five criminal cases against us.

Sergei Khayrulskiy: Some Berkut operatives in Ukraine have already been sentenced to 23 or 24 years in prison. Men who were just protecting law and order in Kiev got longer sentences than some convicted murderers.

And did the people really believe in the 'Maidan'?

Alexander Popov: Of course not! For the majority of Ukrainians, this 'Maidan' was some kind of circus or a freak show. The people were coming to Kiev in droves only to take a look at it. There were many visitors from other cities. However, when the protests turned violent, all the sensible people fled and only the paid activists remained.

Sergei Khayrulskiy: For some, the 'Maidan' was simply a place of work. Man the barricades for six hours, get paid and go home.

Alexander Popov: When we were facing them in the square for the first time, there were men and women among the crowd, like 40-45 years of age. "Guys, just let us stay here until 6 a.m.," they were telling us without beating around the bush. "We were paid to stay here until six. We’ll be only pretending to tussle with you, and then we’ll leave."

Sergei Khayrulskiy: Keep in mind, those football fans weren’t exactly motivated by some sort of ideology. They were hired muscle. Football fan clubs can quickly provide a recruiter with a large number of active, aggressive young men for a reasonable price. A headmaster of some school or academy won’t do such a thing to his students, but the fans are always eager to take to the streets and are capable of mobilizing up to 50 guys in each and every city.

When did the situation become especially volatile?

Alexander Popov: Back then, tearing down statues of Lenin wasn’t quite so trendy; this  was the first time. The Berkut company from Chernihiv, some 30 guys, were deployed to prevent it. They just formed a protective ring around the monument. A throng of up to 300 militants set upon them immediately and started to beat them up. A local shop girl managed to hide one of the wounded operatives in her stall. None of our men were unscathed; they were practically torn apart by the crowd.

Reinforcements were sent to rescue our men. Damn the monument, just let us retrieve our guys, the rioters were told. But no, in response they just tossed an improvised fragmentation bomb into our bus.

Sergei Khayrulskiy: I always wonder why people keep mentioning the so called 'heavenly hundred,' yet no Ukrainian media agency mentions police officers killed during the riots – much more than a hundred, I think — at the Independence Square. I’ve personally witnessed the deaths of three officers, and countless injuries as well. I think about 10% of the force was killed there, yet the Ukrainian TV prefers to ignore it.

What are your most vivid memories from those days?

Alexander Popov: I remember burning gasoline streaming down my back… They threw a Molotov at me. I’m burning, my uniform is melting, and yet my back feels cold. I didn’t feel heat or pain, just cold. I still remember how it felt.

Sergei Khayrulskiy: And I still can’t forget how well organized and massively funded that whole mess was. 'Maidan' was fueled by money and drugs – and it’s not just some Internet rumors, we saw the evidence ourselves.

I mean, we spent two to three days with no food or rest while on duty there, taking short naps whenever and wherever we could. And while we, trained and hardened fighters, were severely exhausted by these ordeals, the people on the other side were always energetic. There's no mistaking it, as we were keeping track of their faces – it is a sort of a professional habit, you see. How many common, untrained people do you know who would be capable of crawling over the barricades, moving construction materials, throwing stones and shouting slogans for three days straight? And there were scores of such people there.

We confiscated many cellphones there during arrests, and found more on the barricades. And the messages on those phones often contained information about huge lists of money transfers: card numbers, phone numbers and sums of money, both in hryvnias and in US dollars.

Alexander Popov: We found big packages of foreign-made army socks, padded clothing, and tons of other stuff. Without all those supplies there would’ve been no 'Maidan.'

There was one other thing. In that six- or seven-story building that was occupied by the Right Sector, there were troop billets of sorts at each floor. There were pallets covered with mattresses, and when we were sweeping the building, we found countless used syringes underneath them.

© Sputnik / Andrey Stenin
17 Significant Moments of the Euromaidan
17
Sergei Khayrulskiy: For a Berkut operative getting captured by them meant certain death. One time a car stopped in front of us, and its occupants dumped a guy from Zaporizhia at our feet. His limbs were broken, and he had been repeatedly stabbed with a spike. We dragged him to the infirmary – no clue if he survived or not…

And at the same time they were constantly calling us to defect to them. Why do you hold the line, they said, your pay is miserable… They offered us apartments in Kiev, they offered us money. Girls promised to marry those who would defect. Basically, throw down your riot shield and you’ll get whatever you want. Even a single turncoat would’ve created a tremendous propaganda opportunity for them, but none of us defected.

Alexander Popov: The decisions were made during a meeting with the Right Sector, when its representatives came to a meeting with our commander. They demanded that we lay down our arms and surrender, threatening to storm our positions if we don’t comply. Our commander replied that now that there is no risk of civilian casualties, they were welcome to try.

There’s our regiment and four battalions from other cities, and all of us are really angry. We said, "Give us an excuse and we’ll take out any attackers, then we’ll march to Kiev and sweep the city clean of your filth." They knew that we weren’t bluffing, so they allowed us to leave. Even those from the Kiev battalion who wanted to leave were able to do so.

And the way we were greeted at home sharply contrasted with how we were treated in Kiev. While in the capital our buses were chased and shot at, the residents in our hometown came all the way to our base simply to hug us. They were lifting us up, toasting our return with champagne. They truly appreciated what we did.

Alexander Popov: I don’t think that I betrayed Ukraine. I thought a lot about this. Today it is basically a fascist state. I love Ukraine as my motherland, but I despise its current state that was brought upon her by the new authorities.

Sergei Khayrulskiy: We still can return to Ukraine. That is, I’m willing to return there to do one thing: to wipe out the sect that destroyed my country.

17 Significant Moments of the Euromaidan