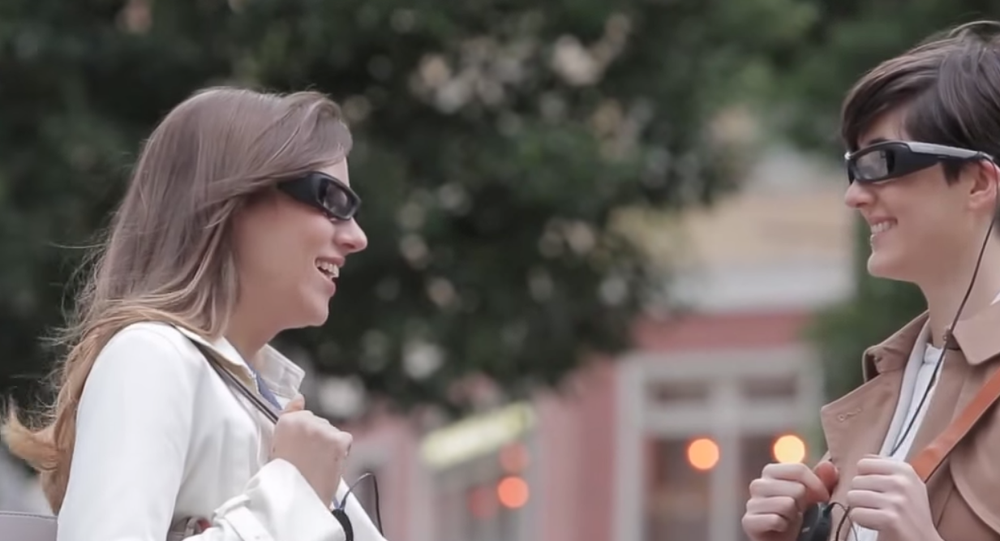 For various reasons, Google Glass has been temporarily shelved. Its capabilities were too limited, the product too expensive, and perhaps most damning of all, they were unstylish. A tiny screen attached to a metallic unibrow which wrapped around users’ head. But Sony promises to fix those problems, with its own new-and-improved smart frames.

They’re called SmartEyeglass Developer Edition eyewear, and if you think that sounds a little wordy, sure, maybe you’re right. But what funding Sony didn’t pour into a catchy branding department, it funneled directly to the product’s tech division.

Imagine – as the company’s website suggests – being lost in a small Italian village. You didn’t want to come to this village, speak no Italian, and you’re supposed to meet your significant other for dinner in half an hour at a restaurant you can’t pronounce. Have no fear. Using the built-in GPS locater in your phone, SmartEyeglass can project directions right before your eyes.

Or suppose you’re watching a football game, no little or nothing about football, but need to spout off some stats to impress your father-in-law. SmartEyeglass can display player, team, or league stats as you enjoy the game.

The glasses can even help with something as complicated as auto mechanics, easily displaying step by step instructions for replacing engine parts while leaving wearers’ hands free to work.

The gadget comes equipped with a built-in 3-megapixel image sensor, accelerometer, gyro, electronic compass, and a separate controller which clips easily to users’ clothes. This remote features a speaker, microphone, and touch sensor, giving users fluid control over the glasses.

Sony is also releasing a software development kit for the glasses, allowing outside parties to create additional apps.

Screenshot/YouTube
The application programming interface allows texts to appear on the display.

The SmartEyeglass headset is already available for pre-order in the UK and Germany and are planned to go on sale in Japan, the US, France, Netherlands, Sweden, Belgium, Spain, and Italy next month. While Sony expects to release the glasses within the next year, buyers will still have to fork over a fairly hefty sum. Still, at $840 a pair, Sony has managed to offer their product considerably cheaper than the $1500 Google Glass kit.

As for the style concern, Smarteyeglass is still a questionable fashion choice. To be blunt, they look like Speedo goggles. Unless you’re prepared to walk around the city with a towel on your arm, pretending to look for a swimming pool, you may be hesitant to make the purchase.

Based on both Google and Sony’s attempts, it looks like fitting smart technology into chic frames is a particularly difficult endeavor. More importantly, if wearable computers are to flourish, it would seem that tech companies need to offer the same kind of frame variety that normal, non-smart glasses offer. Our faces are one of our most unique features, one we use to communicate ourselves to the world. People may be uncertain about hiding their face with a one-size-fits-all, mass-produced device which, in some respects, robs them of their individuality.

Still, the technology comes first, then the fashion, and it looks like Sony is making some huge strides toward what may be the future of augmented reality.

Just to be clear, don’t wear your $900 computer in the pool.