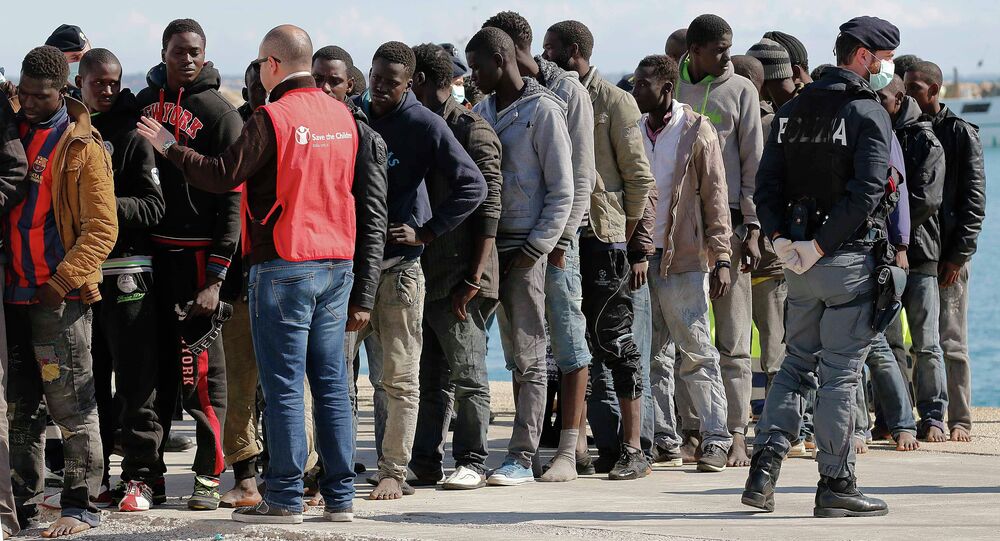 There is no connection between ISIL activities and the interest of migrants using Libya as a bridge to Europe, according to the International Organization of Migration press officer.

© REUTERS / Antonio Parrinello
300 Migrants Missing After Attempt to Cross Mediterranean
MOSCOW (Sputnik), Anastasia Levchenko — The current flow of undocumented migrants from North Africa to Europe is not directly linked with the recent activities of Islamic State (ISIL) militants in Libya, the International Organization of Migration told Sputnik on Tuesday.

Affiliates of the Islamic State militant group are gaining ground in Libya, raising anxiety in Italy, separated from the country by just a narrow sea passage, to where there has been an influx of undocumented migrants.

"There is no connection that we know of IS activities and the interest of migrants using Libya as a bridge to Europe. We think that it is driven first of all by the terrible conditions of the countries people are leaving from – principally, Syria and the Horn of Africa," Joel Millman, press officer for the International Organization of Migration, told Sputnik.

Millman emphasized that both internal and external factors affect migration trends, and therefore, an upsurge in the number of migrants sometimes can come as a "mystery."

"We have mysteries. We do not know why exactly, for example, last week we started seeing a lot of people from Cote d'Ivoire," Millman said, adding that migration generally increases when people become more aware of ways to leave their country, in search of a better life.

© AFP 2021 / THIERRY CHARLIER
Italy’s Renzi Says It's Too Early for Military Intervention in Libya
Earlier on Monday, Italian Interior Minister Angelino Alfano told La Repubblica newspaper that the United Nations should send a peacekeeping mission to Libya immediately amid deteriorating security and an exodus of migrants due to IS expansion.

Alfano echoed the words of Maltese Prime Minister Joseph Muscat, who said on Sunday that instability in Libya could flood the entire Mediterranean region with undocumented migrants, fleeing sectarian violence.

As the UN refugee agency's (UNHCR) statistic shows, the number of people who fled to European countries that border the Mediterranean from North Africa after the beginning of the civil war in Libya in 2011, rocketed to some 61,000 compared to almost 10,000 in the previous year. In 2014, more than 170,000 migrants arrived to Italy, with most of them from Libya.

On Sunday, IS released a video showing the beheadings of 21 Egyptian Coptic Christians who had been abducted in the Libyan city of Sirte. In response, Egyptian jets bombed the militants' positions.