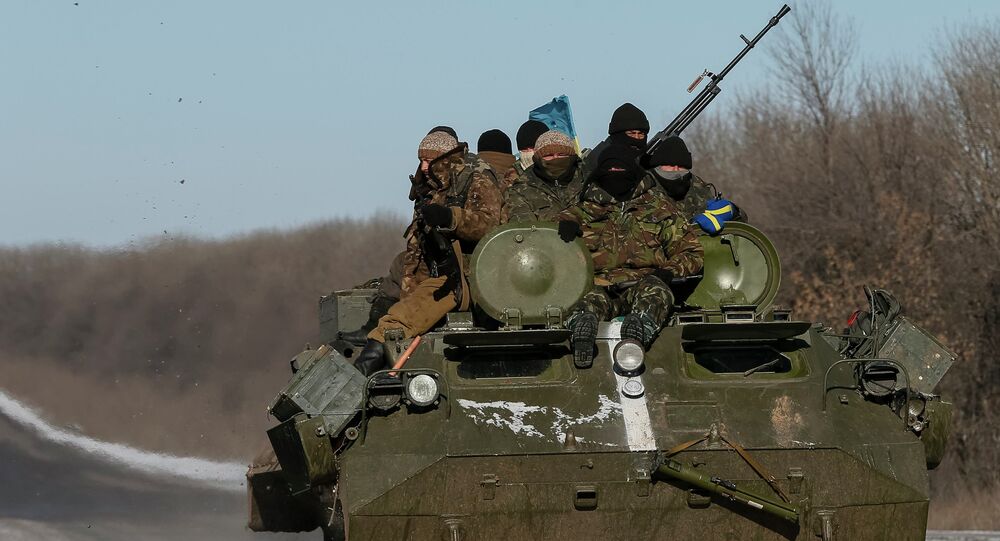 Ukrainian Military Pulling Out of Debaltseve

On Wednesday, Ukrainian President Petro Poroshenko announced that government troops were withdrawn from the strategic transport hub of Debaltseve in eastern Ukraine, where about 5,000 soldiers had been surrounded by independence supporters.

KIEV (Sputnik) – Ukrainian President Petro Poroshenko has confirmed the planned withdrawal of troops out of the Debaltseve area.

"Our units have withdrawn in a planned and organized manner. Completely, with their combat hardware, battle tanks, artillery and trucks", he wrote on Twitter.

This morning several Ukraine's Armed Forces and National Guard units withdrew from Debaltseve in an orderly and pre-planned manner.

Also on Wednesday, Poroshenko announced that he is heading to the frontline to meet the troops who have left Debaltseve.

“I called for a meeting this evening with the [Ukrainian] National Security Council and Defense. I am currently heading to the frontline to meet those who fled Debaltseve,” the president’s press service quoted him as saying.

“The withdrawal of troops from Debaltsevo is underway as planned and organized,” Semenchenko wrote on his Facebook page Wednesday, adding: “All of the stories about the control over Logvinovo turned out to be fairy tales and the pumpkin didn’t turn into a carriage.”

"Debaltseve is currently being swept, the Ukrainian troops there are demoralized, the commanders have left, and there is practically no mobile phone service because the communications tower was destroyed," Donetsk News Agency quoted Maksim Leshchenko as saying.

Leshchenko added that hundreds of Ukrainian military personnel were turning over their weapons in one of the last hot spots of Debaltseve.

“A mass turnover of weapons by Ukrainian forces is underway in Debaltsevo. The numbers of people are in the hundreds,” Leshchenko told the news agency.

Debaltseve, a strategic transport hub in eastern Ukraine, still remains one of the hotspots for violence in Ukraine. It is the place where about 5,000 Ukrainian soldiers have been encircled by independence supporters.

On February 12, during the talks held by the leaders of Russia, Ukraine, France and Germany in the Belarusian capital Minsk, a ceasefire deal was agreed on to deescalate hostilities in the region. The agreement also stipulates the withdrawal of artillery and prisoner exchanges.