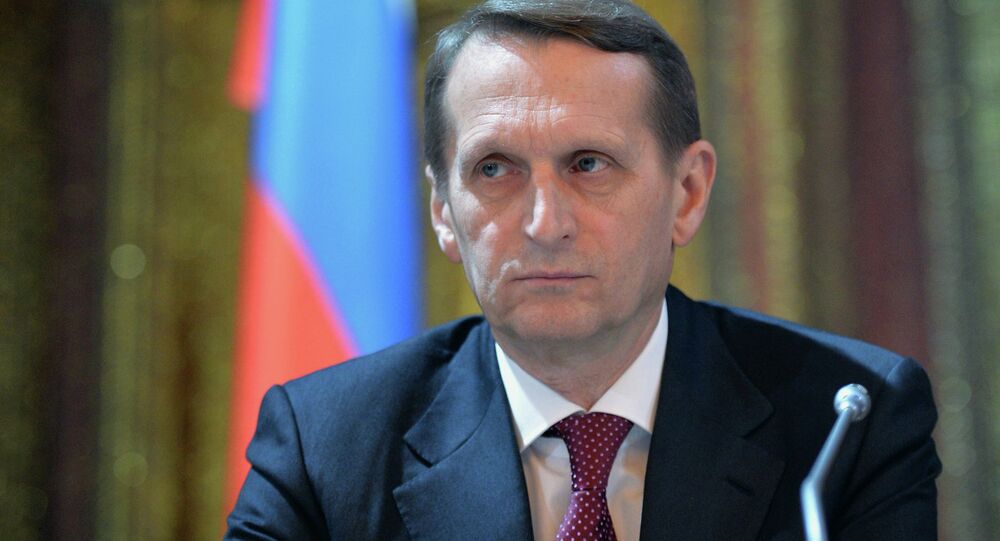 Russia's lower house of parliament speaker stated that delivery of lethal weapons from the United States to Ukraine will lead to a breach of the Minsk agreements.

© Sputnik / Mikhail Klementyev
Putin Says West Already Delivering Weapons to Kiev
TYUMEN (Sputnik) – The delivery of lethal weapons from the United States to Ukraine will lead to a breach of the Minsk agreements and both Kiev and Washington will be to blame, Russia's lower house of parliament speaker said Wednesday.

"If deliveries of lethal arms to Ukraine from the United States begin, it may obviously lead to a breach in the Minsk agreements and then both Kiev and Washington will be officially to blame," Russian Duma Speaker Sergei Naryshkin told journalists.

The lawmaker's comments follow a statement made by Russian President Vladimir Putin on Tuesday. During a press conference after talks with Hungarian Prime Minister Viktor Orban, Putin said the West is already delivering weaponry to Ukraine.

Kiev government has repeatedly asked the United States and European Union member states for lethal weaponry supplies. While a number of European states, in particular France, Italy, Spain and Finland, have refused to deliver arms to Ukraine, the United States is yet to make a decision on the issue.

The supply of lethal aid run counter to the Minsk agreements on Ukrainian reconciliation, signed in Minsk, the capital of Belarus, on February 12. The agreements stipulate a ceasefire between Kiev forces and independence supporters in southeastern Ukraine.

In April, a military operation was launched by Kiev in retaliation to eastern Ukraine residents' refusal to recognize what they considered to be a coup-installed government. According to UN data, over 5,600 were killed due to hostilities in war-torn Ukraine since the start of the operation.