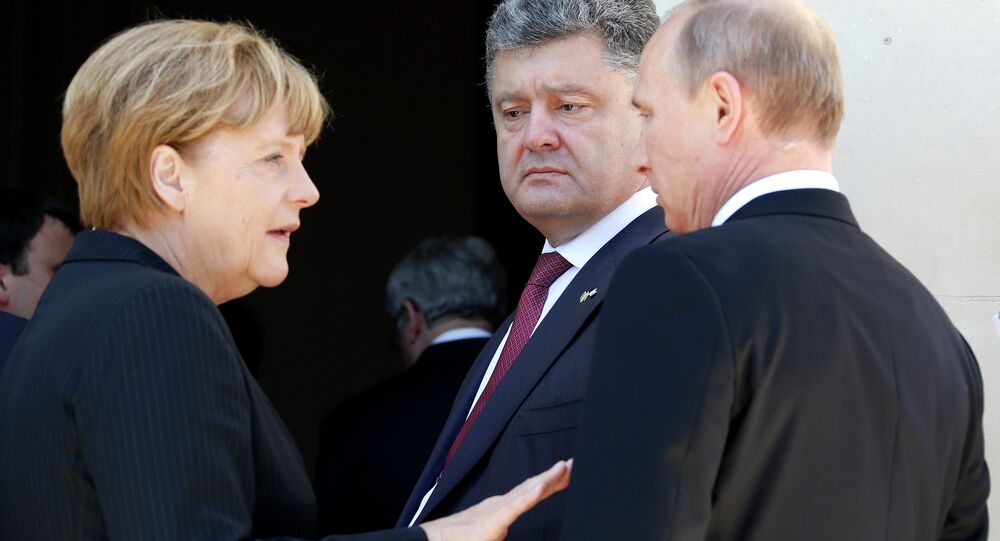 Putin, Merkel, Poroshenko have agreed on concrete steps for the observers from the OSCE to monitor the situation in eastern Ukraine.

© AFP 2020 / JOHN MACDOUGALL
Minsk is a Sign of Hope, Greek Government Needs Purer Wine – Merkel Ally
MOSCOW (Sputnik) – The leaders of Russia, Ukraine, and Germany have agreed on concrete steps for the observers from the Organization for Security and Co-operation in Europe (OSCE) to monitor the situation in eastern Ukraine, a German government representative was cited as saying by Reuters on Tuesday.

Details on the steps to bring peace to the region during the telephone conversation between the three leaders on Monday evening were not revealed, AFP reported.

On February 12, Russian President Vladimir Putin, Ukrainian President Petro Poroshenko, French President Francois Hollande, and German Chancellor Angela Merkel struck a deal to end the violence in the eastern Ukrainian regions of Donetsk and Luhansk. The meeting of the four leaders in Minsk, Belarus, led to the signing of a deal between Kiev authorities and the leaders of the self-proclaimed Donetsk and Luhansk people's republics on a ceasefire and the pulling back of heavy artillery.

The OSCE is to serve as a mediator and observer of the ceasefire between the Ukrainian sides. The OSCE's Special Monitoring Mission that carries out the monitoring in Ukraine has been reporting on the situation in country's war-torn eastern regions since March 2014.

The Minsk reconciliation agreement, aimed at putting an end to the military confrontation between the warring parties, stipulated compliance with the ceasefire regime in Ukraine, beginning with midnight local time on February 15 (22:00 February 14 GMT).

Moreover, the deal provided withdrawal of heavy artillery from the line of contact between the conflicting sides within two weeks starting from February 17 and prisoners swap.