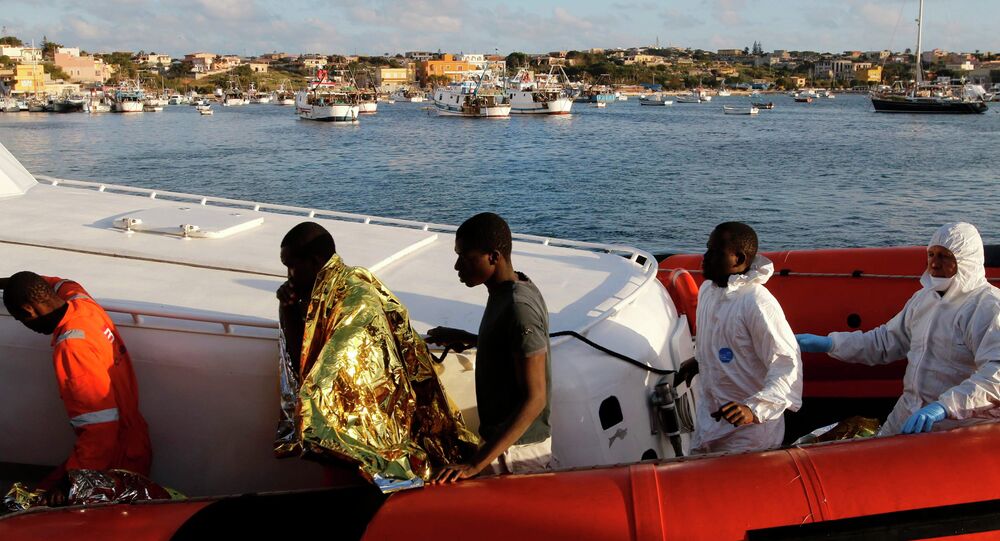 More than 300 African migrants are missing in the Mediterranean after overcrowded dinghies sank on the way to Italy.

UNITED NATIONS, February 11 (Sputnik) — Over 300 migrants who left Libya for Italy in four dinghies are now confirmed missing, the Office of the UN High Commissioner for Refugees (UNHCR) said Wednesday.

"Reports gathered by UNHCR from the Italian Coast Guard and the survivors in Lampedusa now suggest some 300 people are confirmed missing," the UNHCR said in a statement.

The agency said it was "shocked at new information emerging on the actual scale of the tragedy", reiterating its concern about the lack of a strong search and rescue operation in the Mediterranean.

© REUTERS / Antonio Parrinello
At Least 200 Migrants Missing After 4 Boats Sink in Mediterranean - UNHCR
The new numbers triple UNHCR's previous estimate of those who went missing in the four vessels, the youngest of whom is a 12 year old boy.

Meanwhile, the International Organization for Migration (IOM) estimated that the number of casualties after the incident could surpass 330.

"The situation is as follows: on Monday, the Italian coast guard rescued a boat carrying 105 migrants, of whom 29 died of hypothermia. This morning, nine migrants were transported to Lampedusa from two boats that sank. These carried 105 and 107 people," an IOM spokesman claimed. In addition, a fourth vessel carrying 105 people is still missing.

The Mediterranean Sea is one of the main routes for migrants fleeing conflicts in Africa and the Middle East trying to reach Europe. At least 218,000 people crossed the Mediterranean in 2014, and the trend is set to continue in 2015, according to the UN.