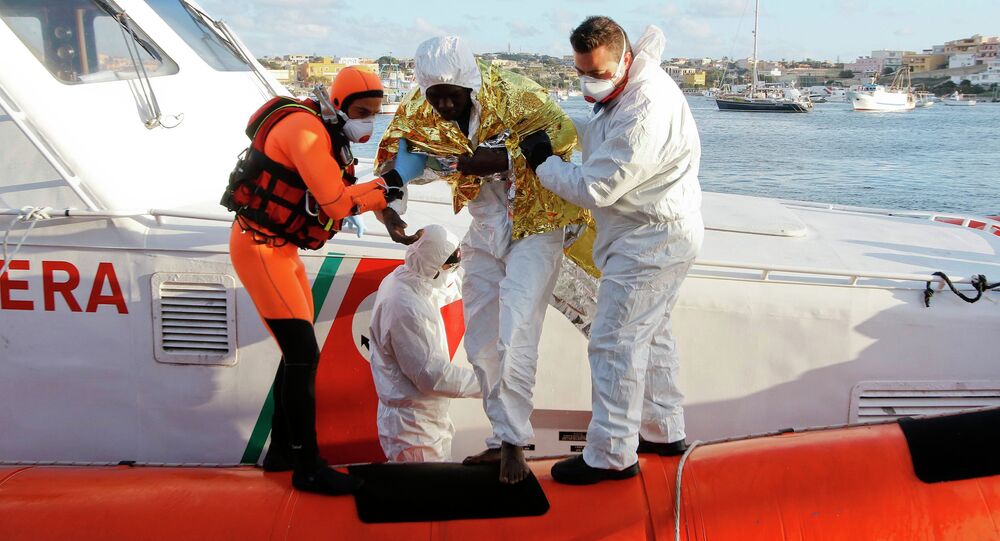 The UN refugee agency confirms that at least 203 people are unaccounted after four migrant boats have sunk in the Mediterranean Sea.

© AFP 2021 / ITALIAN NAVY
Boats With Migrants Sink in Mediterranean, Over 300 Feared Dead - IOM
MOSCOW (Sputnik) — At least 203 people remain missing after four boats carrying migrants sank in the Mediterranean Sea, while the fate and exact number of those who were on one of the dinghies is still unknown, the spokesperson and head of the press office for Southern Europe of the UN's refugee agency, UNHCR, told Sputnik Wednesday.

"Today in Lampedusa arrived 9 survivors, and with them there were 203 people that now are missing. Probably a fourth dinghy was with them. We do not know the fate of those who were on board. And other 104 were reached by the coast guard on Sunday. 29 of them have died when on board of the coast guard vessel," Carlotta Sami said.

Earlier in the day, spokesman for the International Organization for Migration (IOM) Joel Millman told Sputnik that as many as 300 migrants are feared dead.

The Mediterranean Sea is one of the main routes for migrants fleeing conflicts in Africa and the Middle East and trying to reach Europe. The Italian island of Lampedusa is located just 70 miles from Tunisia, and is a popular stop for migrants arriving from North Africa. Their overcrowded boats often sink and migrants die of hypothermia.