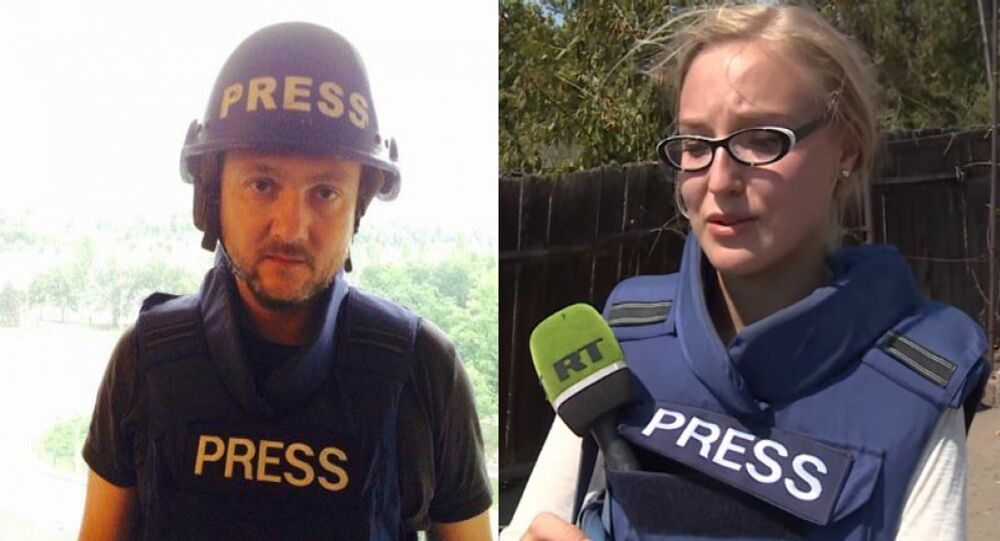 RT journalists Roman Kosarev and Anna Knishenko had been fired upon near a checkpoint, from which buses with civilians were to leave the city in the southeast of Ukraine.

RT reporters have come under fire Friday in the city of Uglegorsk, Donbas region, where the evacuation of civilians is underway.

#RT we are back in #Donetsk. Our crew came under sniper fire en route to #Debaltsevo today. We were shot at while standing at checkpoint.

RT journalists Roman Kosarev and Anna Knishenko had been near a checkpoint near Debaltseve, from which buses with civilians were to leave the city.

© REUTERS / Valentyn Ogirenko
Kiev Forces Fire at Civilians, Journalists in East Ukraine During Evacuation
According to RT, its crew had to run for shelter after it was caught up in a mortar attack on the western outskirts of Debaltseve.

Correspondents of the Russian TV channel Rossiya-24, Dmitry Malyshev and Artyom Kol, were in the city of Chornukhyne in the country’s east, when they were attacked by Kiev forces.

On Thursday it was reported that Kiev had accepted a proposal by the authorities of the self-proclaimed Donetsk People's Republic (DPR) to establish a fully-fledged ceasefire in the contested Debaltseve area on Friday to ensure the safe evacuation of civilians from the combat zone. Earlier, the head of the OSCE Special Monitoring Mission to Ukraine (SMM) urged all sides of the Ukrainian conflict to establish a temporary ceasefire agreement that would allow for the creation of humanitarian corridors in areas affected by deadly military action, especially around Debaltseve.
Kiev-led troops and independence fighters in eastern Ukraine have traded blame for fatal shelling incidents in the region in recent weeks. The attacks killed dozens and wounded hundreds of civilians in conflict-torn cities of Donetsk, Mariupol and Debaltseve, a key rail junction, which has been a hot spot of violence.
Prior to the latest agreement, violations of the September, 2014 Minsk ceasefire deal have continued unabated since the start of 2015, which saw intensified fighting between independence supporters and Kiev forces that launched a military operation in Ukraine's southeast in mid-April last year.
...
Reddit
Google+
Blogger
Pinterest
StumbleUpon
Telegram
WhatsApp
810
Topic:
Situation in Ukraine After Ceasefire Agreement (450)