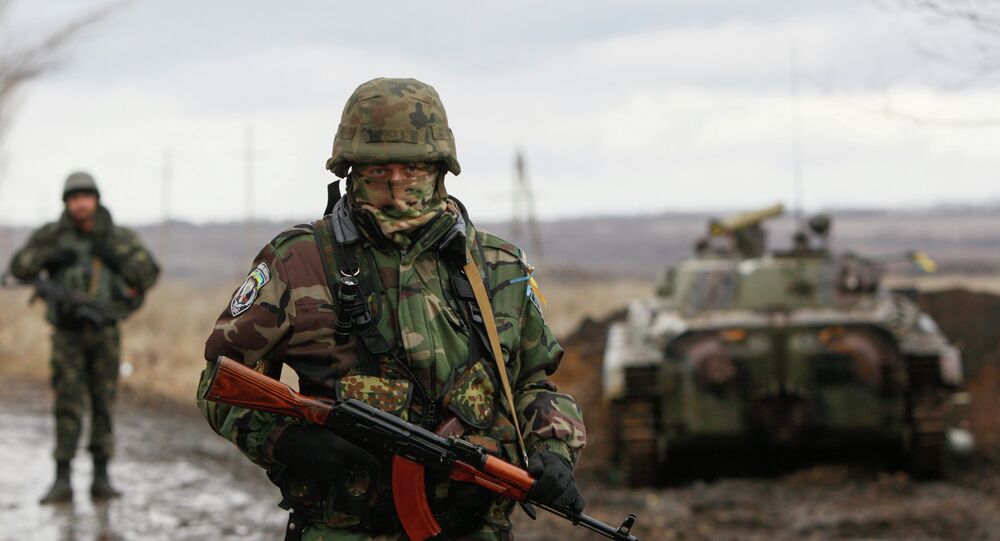 Donetsk People's Republic's official claims there is evidence that a Ukrainian army artillery unit plans to shell a passenger bus carrying refugees from the contested Debaltseve area in Donbas region ahead of the Munich security conference.

© AP Photo / Sergei Grits
Kiev Using Western Lethal Arms, US War Tactics in Donbas
DONETSK (Sputnik) — Donetsk authorities have evidence pointing out at Kiev's plans to attack a bus with refugees from Debaltseve and use this provocative act to discredit pro-independence forces ahead of the Munich security conference, an official from the self-proclaimed Donetsk People's Republic (DPR) said Wednesday.

"To achieve this goal, a Ukrainian army artillery unit will shell a passenger bus carrying refugees from the contested Debaltsevo area [in Donbas]," deputy head of the DPR forces Eduard Basurin told reporters in Donetsk.

© Sputnik / Igor Maslov
PACE Refuses to Recognize Donetsk, Luhansk People's Republics As Terrorist Organizations
According to Basurin, the evidence was obtained earlier on Wednesday from questioning an Ukrainian officer, who had surrendered to a unit of the DPR forces on February 2.

Basurin added that the Kiev leadership was planning to disseminate this fact through the Ukrainian and foreign media with the goal to discredit the DPR ahead of the Munich security conference on February 6-8, and to push for the recognition of the DPR as a 'terrorist organization' by the world community.

© Photo : Pixabay
Hackers Leak Ukraine Security Service Docs Showing False Flag in Volnovakha Bus Attack
Debaltseve is a key rail and road junction in the region. Thousands of Ukrainian troops are currently trapped within in the city, and pro-independence forces surround the area. The OSCE urged the warring parties on Wednesday to agree on a truce to give residents time to escape violence. The eastern Ukraine conflict will come up during the Munich conference on European security, with Russian Foreign Minister Sergei Lavrov and US Vice President Joe Biden expected to speak, the conference's chairman Wolfgang Ischinger of Germany told RIA Novosti.
...
Reddit
Google+
Blogger
Pinterest
StumbleUpon
Telegram
WhatsApp
207
Topic:
Situation in Ukraine After Ceasefire Agreement (450)